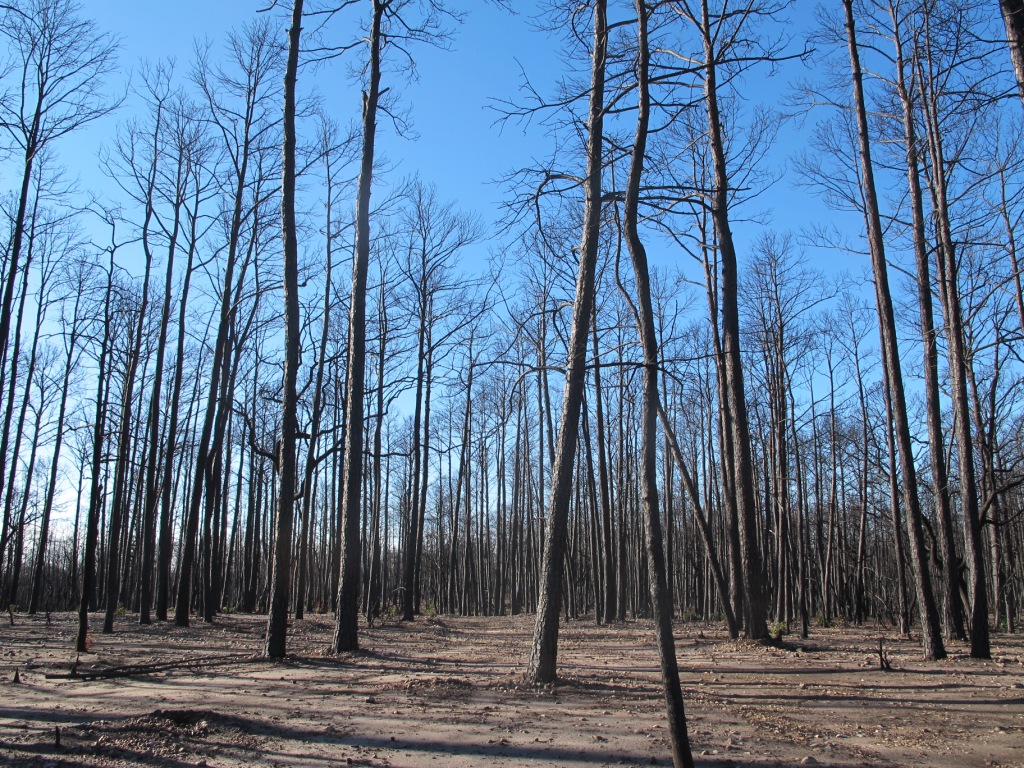 This photo shows Bastrop State Park, what had been prime habitat for the endangered Houston toad. The photo was taken on January 13, 2012, slightly more than three months after the devastating wildfire that scored more than 34,000 acres and destroyed 40 percent of Houston toad habitat in the Park. (Photo courtesy of Houston Zoo)

Last September, a tropical storm in Louisiana, combined with a cold front to the north of Texas pushed an exceptionally dry and windy air mass into the central part of the state.  These weather conditions, combined with drought-stressed vegetation in a fire-suppressed ecosystem created the perfect conditions for one of the worst wildfires in Texas history.

What is now known as the Bastrop County Complex fire, burned through a total of 34,300 acres including an area near Austin, the state capitol known as Lost Pines and in Bastrop State Park.  The area, prime habitat for the endangered Houston toad, experienced what is called a “stand replacing” fire, meaning it totally destroyed the forests and sterilized the soil.  The fire dealt a harsh and potentially fatal blow to the Houston toad, whose largest and healthiest populations dwell in the park and adjacent ranch land.

Last November, an assessment team of local, state and federal agencies issued a fire recovery plan.  On Friday, January 13 representatives from the Texas Forest Service, Texas State University, Texas Parks and Wildlife Department, the Houston Zoo and others gathered at a workshop to discuss next steps, ranging from short and long-term revegetation strategies and erosion control, to post-fire land and wildlife management. Support for the recovery effort was plainly evident as more than 250 concerned area residents turned out for the workshop.

Rachel Rommel, the Houston Zoo’s Conservation Communications Manager introduces a group of Capital Area Boy Scouts to Houston toads before the Scouts launched in the first of many efforts to restore Bastrop State Park, laying mulch and leaf litter in scorched Houston toad habitat in the Park. (Photo courtesy of Houston Zoo)

But first steps are being taken toward recovery.  On Saturday, January 14 Rachel Rommel, the Houston Zoo’s conservation communications manager led a group of Capital Area Boy Scouts in the first of what will be many efforts to restore scorched areas of Bastrop State Park, laying mulch and leaf litter in an effort to add organics to the soil and restore habitat for insects and toads.

Concurrently, Houston Zoo conservation staff is encouraging landowners with toad-appropriate environments in neighboring Austin and Colorado counties to welcome Houston toads that were head started at the Houston Zoo to their properties.

The 2011 fires were a terrible blow for the Lost Pines habitat and the Houston toad, but as long as there are toads at the Houston Zoo and Texans who care, there is still a chance for this endangered species to thrive again in the wild.