General objective: Learn about the diversity of frogs that exist in Panama.
Specific objective: Be able to identify the frogs using a dichotomous key.

Introduction
Look at the different frogs on exhibit at the Punta Culebra Nature Center or the El Valle Amphibian Conservation Center, alternatively, look at the poster amphibians of Panama. There are more than 200 amphibian species Panama, it is a biodiversity hot spot for amphibians! In this activity, students will become familiar with just a few of the species. At the same time they will learn to use a dichotomous key to identify them. A dichotomous key is a tool that scientists use to tell species apart, especially if they look similar. It consists of a series of questions with two possible responses. The response to each question will lead you to the following question, until you arrive at the name of the species you are attempting to identify. When you succeed at this activity you will have successfully identified 7 amphibians that are native to Panama.

Activity: Which amphibian is which? 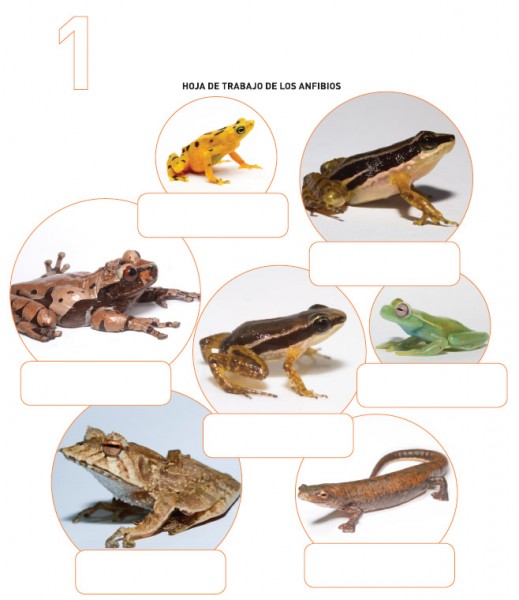 Dichotomous key of amphibians
1. Does the amphibian have a tail?
Yes……… The Cocle Salamander (Bolitoglossa schizodactyla)
No………. go to 2

2. Does the amphibian have a triangular head with a sharply pointed nose?
Yes …………….Banded Horned Treefrog (Hemiphractus fasciatus)
No ……………..go to 3

3. Is the amphibian mostly yellow in color?
Yes……….. Panamanian Golden Frog (Atelopus zeteki)
No, go to 4

Procedure
• Give groups the amphibian worksheet and ask the groups to discuss which frogs have shared characteristics.
• Discuss the dichotomous keys and how scientists use them to identify species. Give each group a dichotomous key of frog species and use it to identify the frogs.
Adapting for other age groups
For younger groups you could simply give the students the frog pictures and ask them to describe them verbally. Guide the discussion with questions such as: Are all of the amphibians in these pictures the same? What differences do you see? What similarities? Which frog is your favorite? Why?
For older students, after finishing the activity you could give 5 or 6 new pictures to each group so that they can create their own dichotomous key and invent names for the amphibians according to the characteristics they see.

You can help save frogs as a citizen scientist

Be a frog scientist! Help us monitor wild frogs taking photos and recording sounds of frogs and share them as part of the Global Amphibian BioBlitz. Scientists need your help to find out which frogs are still surviving in the wild. Anyone with a camera and internet access can now be a citizen scientist. The best time to look for frogs is at night near a stream or pond after it has rained, you will be able to hear the frogs calling! If you go out at night, make sure that you are accompanied by an adult, that you have a good headlamp and wear rain boots.