The Variable Harlequin Frog is found on both the Pacific and Atlantic versants, from Central Panama all the way up to Costa Rica. The name defines its variable nature within individuals, which ranges from black, green, red, and all the way to a golden orange, much resembling the Panamanian Golden Frog. 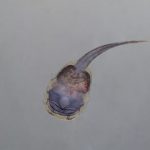 Status in the wild: This species, once common in the wild, was thought to be locally extirpated in many of the 100 known populations in Costa Rica in 1996, only to find remnant populations nearly a decade later. Populations in Panama dramatically declined in the highlands due to the chytrdiomycosis. Other threats that impact this species include land-use change, and predation by introduced trout in native streams. In Panama this species was found in several protected areas.

Status in captivity: In 2004, during a chytridomycosis-related decline, the Cleveland Metro Zoo received approval to establish a captive population of adult Variable Harlequin frogs under Project Golden Frog in the United States. That population is trending to be stable at the moment. The first highland females were brought into captivity in 2007 after the disease struck but no males were found until the following year. The full founding population was not collected for the highland variable harlequin frog, however the founding animals bred and continue to breed, producing many offspring. The lowland populations are currently being taken into captivity and are expected to have a full founding population by the end of 2015. The first release trials for this species were started in January 2018 in the Donoso area.