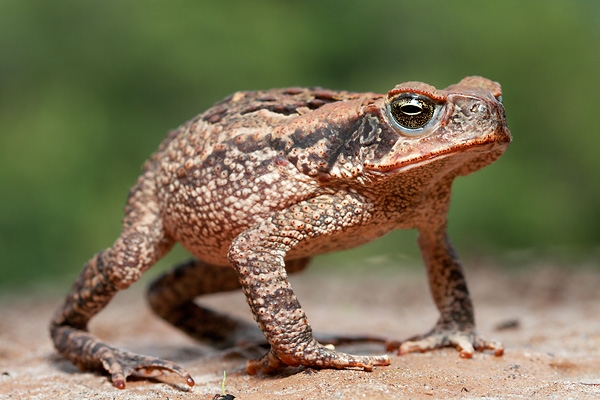 This toad, although cute, is deadly. The cane toad (Rhinella marina) is highly toxic to many animals. It is most toxic as a tadpole; as an adult its toxicity affects different species and even individuals within a species differently. This nocturnal toad’s toxin that is secreted from its skin is capable of killing freshwater crocodiles and is even harmful to humans.

The cane toad does have one predator that is immune to its defensive toxin: ants. Ants that are not affected by its toxin can attack the frog at will. Some freshwater fish can also withstand coming in contact with the toxin, and show no ill affect from spitting the cane toad out after trying to swallow it.

Although the cane toad looks harmless with its speckled skin and blue-ringed eyes, it is considered a pest in northeastern Australia, the southern United States and the Caribbean. It is an invasive species in those areas with few natural predators.