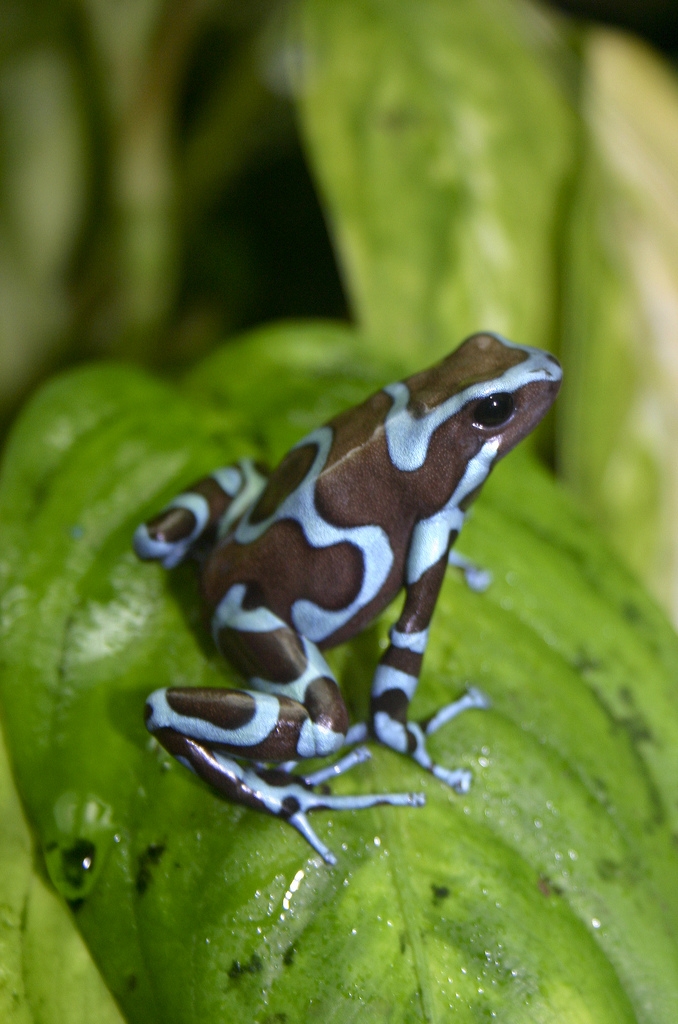 What clothing designer wouldn’t want the fashion sense of these flashy frogs? But be careful! Their beautiful color patterns are a warning signal to predators that says: “Hey! You’ll regret eating me!!!” Okay, maybe not exactly that…but they are one of the world’s most poisonous amphibian species.

Green poison dart frogs have distinct green and blackish-brownish coloration all over their bodies, though the greenish color can vary from bright green to golden to even blue. Their patterns also vary, from stripes to marbled lines to dots.

The frogs are native to Central America, but visitors to Oahu, Hawaii may also see them because these little frogs were introduced to the island in order to control the bug population. Researchers believe that the types of insects that these frogs eat have a direct effect on how poisonous they are. In fact, native hunters used the poison from these frogs on the tips of their arrows and darts.

Despite the fact that males are territorial and females physically fight each other for the right to mate, they are very good parents. A male’s mating call sounds like an insect buzzing, and after attracting a female, she will lay eggs on a nest of moist leaf litter arranged by the male. He will then watch over them there, cleaning and rotating them as necessary. Once the eggs hatch, the males will carry their tadpoles on their backs to a nearby pond or stream and release them. They will then be on their own and have to fend for themselves. A male may mate with multiple females and will still take care of all its offspring.

Green poison dart frogs are not currently considered threatened and they are a popular pet species for experienced enthusiasts.