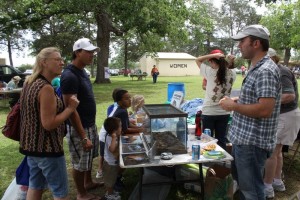 Learning about endangered species is the first step in helping to protect them.

In 1968, a small amphibian landed a spot on the list of “Rare and Endangered Fish and Wildlife of the United States.” Five years later, the Houston toad was included in the passing of the Endangered Species Act and became one of the first amphibian species in the United States, and maybe even the world, to be recognized as declining.

Today the Houston toad is no longer found in its namesake city, and fewer than 300 individuals remain in the wild, largely due to habitat loss.  The Houston Zoo is working with the US Fish and Wildlife Service, Texas Parks and Wildlife Department, Texas State University and the Environmental Defense Fund to ensure the toad’s survival. The Zoo also works with private landowners to restore habitat and monitor populations in Houston toad counties. But before we can involve a landowner in the project we have to find them–and that’s where the Zoo’s education and outreach programs come in.

Mainstream media of course plays a major role in the effort.  A recent front-page story in the Houston Chronicle highlighted the need for private landowners to participate in the restoration project. The article generated a dozen responses from interested landowners and raised the profile of the effort. But grassroots efforts also play an important role.

Through our collaboration with the US Fish and Wildlife Service and the Texas Parks and Wildlife Department, the Zoo has developed opportunities for the presentation of education and outreach programs in counties northwest of Houston, the Houston toad’s current range. In late February, a landowner workshop sponsored by Texas AgriLife Extension and the Texas Forest Service brought 200 landowners together to learn about woodland and pond management and how to get involved in the Houston toad recovery project. Recently, three members of the Houston Zoo Conservation Department participated in the Milam County Nature Fest 2012. Supported by the Texas Parks and Wildlife Department, the festival drew more than 600 participants from surrounding communities in prime Houston toad range for a day of nature exhibits and demonstrations, crafts and games for children and an opportunity to meet Houston toads and hear from those who are directly involved in the toad’s recovery.

It’s one thing to tell the world about the importance of amphibians to the balance of nature. It’s another thing entirely when you see the smile on a child’s face when they have an up-close encounter with an endangered species. Then you know you’ve connected.