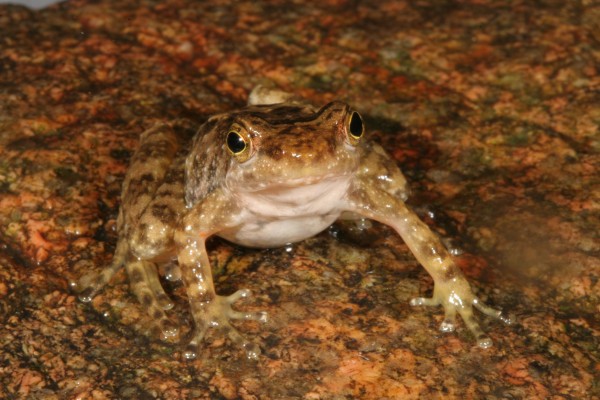 About 27 years ago, no one in Australia thought twice about the Eungella torrent frog (Taudactylus eungellensis). Then, suddenly, populations first at low altitudes and then even those higher up began to decline. For more than five years in the late 1980s and early ’90s, no one reported seeing these frogs. Fortunately, since then nine small populations have been discovered, although they are reproducing slowly. The frog is still listed as critically endangered, and the fact that its habitat is small and fragmented means it isn’t out of the woods yet. Scientists don’t know what caused the population to plummet in the first place, but chytrid may have been involved. Now, important habitat is protected and the frog is listed as endangered by the Australian legislature, while scientists are working to learn more about it.

Photo by John Augusteyn via Arkive.