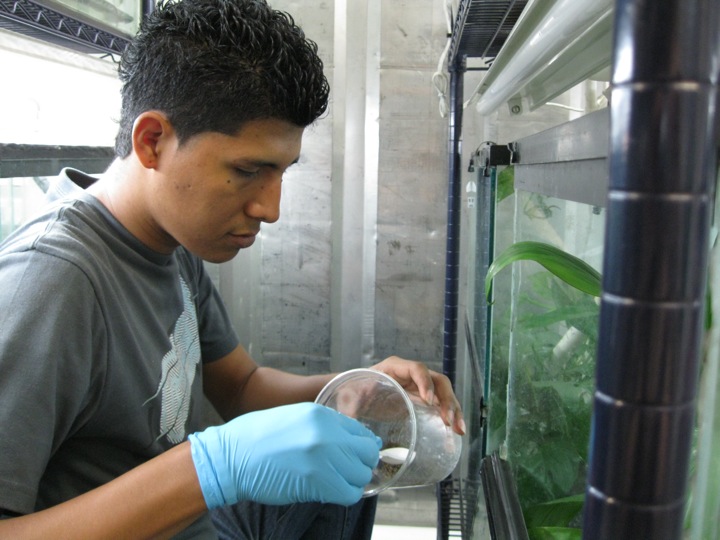 Jorge Luis Gurrel Soriano, one of the project's frog keepers, shows me how to feed one of the La Loma tree frogs in the rescue pod.

It’s official. When it comes to spotting La Loma tree frogs (Hyloscirtus colymba), I just don’t have what it takes. These light green frogs plaster themselves to the underside of leaves and blend right in—a testament to Mother Nature’s brilliant design.

Of the 24 La Loma tree frogs that I was assigned to find in the tanks in the rescue pod yesterday, I found only 10. That’s 42 percent, or a solid F in most classrooms. Pretty freaking lousy.

It didn’t much matter, though, just as it didn’t much matter that my primary task yesterday was to do spot checks (read: find the frogs, clean their poo). I was just thrilled to be in close contact with the animals. In addition to performing spot checks in the rescue pod that is up and running, I’ve given the frogs their breakfast and helped with providing medication this week. This has all made me very appreciative of what the rescue project’s five keepers are doing behind the scenes to keep the frogs alive.

There’s Angie and Jorge, the primary frog keepers, who handle the animals delicately, but in a way that suggests they know exactly what they’re doing and that they’re good at it. Angie gets up around 4:30 every morning to make it to work, which is probably why she drinks plenty of tea in the morning—steeped in a large plastic cup with a cartoon frog sketched on it. The keepers use these plastic cups otherwise for crickets and other froggie food items.

Jorge apparently has just the right touch—I watched, captivated, as he skillfully provided medical care for one of the frogs. He’s also completed the creation of two beautiful breeding tanks during my time here and tomorrow I’ll have a chance to watch him move four Toad Mountain harlequin frogs (Atelopus certus) to their new homes and introduce them to their new mates.

Then there’s Rousmery and Nancy, who shatter the stereotype that girls will run shrieking from the room at the sight of a creepy crawly. These two work the entire day straight in a room that is full of crickets. It sounds like nighttime and smells like, well, I suppose it smells a whole lot like cricket poo. 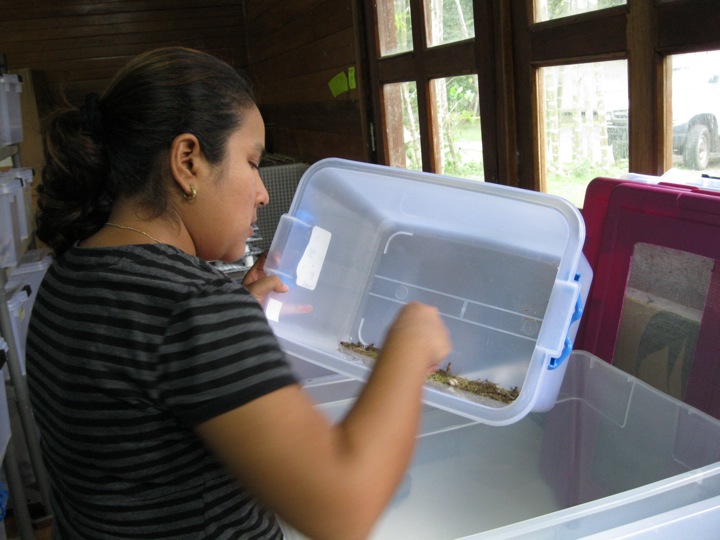 Rousmery Bethancourt, who taught me how to identify female crickets, has helped ensure that the frogs are well fed.

These two women are in charge of caring for the crickets and other insects the frogs eat. They have to develop and modify breeding techniques to ensure that the food doesn’t run out. Yesterday Rousmery and Nancy reported that they’ve got 85 boxes of crickets—too many for the frogs here at Summit, so we’ll take the leftovers to the other project facility, El Valle Amphibian Conservation Center, on Friday. After months of trying to figure out how to produce enough crickets, too many insects is a blessing.

Lastly, there’s Lanky, who is the jack of all trades, helping do a little bit of everything, as needed. Unlike the others, who get up early and take the bus (or two) to work, Lanky takes a boat in from the Wounaan Village of San Antonio in Gamboa. He carves the most beautiful frogs out of tagua nuts, most of which are species we have in captivity. The details are so intricate it’s as though the frog might up and hop away at the first sign of a cricket.

These five are all biology experts and love frogs unabashedly. They are now among my frog heroes and if we can harness their passion and make sure it spreads, I am certain amphibians stand a fighting chance.