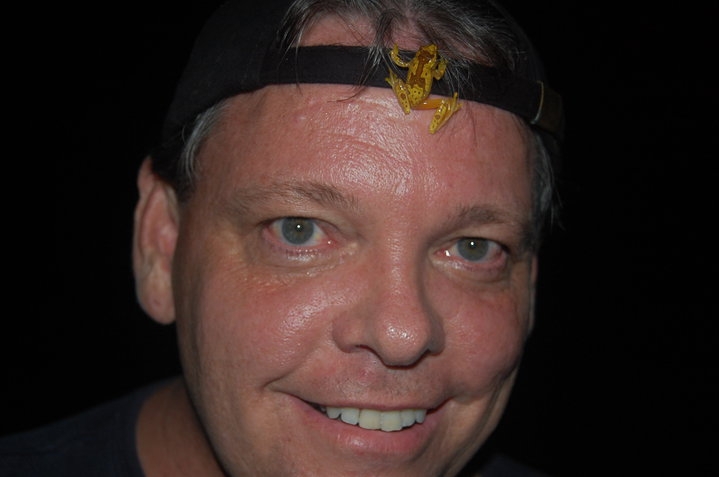 As a volunteer for the rescue project, Jeff Coulter helped both to care for frogs at Summit Zoo and to build the second rescue pod.

Author Ralph Charell once said: “Nobody exceeds his or her wildest expectations unless he or she begins with some wild expectations.” I think that nicely sums up my recent trip to Panama as a volunteer with the Amphibian Rescue and Conservation project. To be candid, my expectations ranged from the mundane (constant cage cleaning) to the extravagant (finding a Panamanian golden frog in the wild). So by the time I got to Gamboa, I had no idea what to expect.

To try to share everything that I experienced in my eight days as a volunteer would fill up a number of blog posts, so I will try to stick with the highlights.

Building Frog Habitats: Sounds mundane and routine…is mundane and routine. And that’s how I thought about it at first.  But the more I thought about it, the more inspired I became. Sure it’s not the most exciting work around, but just about the time I thought I would hate doing it, I realized that I hated the fact that it needed to be done even more.  The project’s goal is to establish an amphibian ark where scientists can maintain healthy, genetically diverse populations of priority species. At one time Panama had more than two hundred species of frogs. Twenty-five of those have already gone extinct and as many as half of the rest are on the verge of extinction. If by hanging lights, and building cage bottoms I could play even a small role in helping keep a species from going extinct, I was more than willing to do whatever was necessary.

Spot Checks: The project has a number of employees who really give from the heart, but there is so much to do each day! On a couple of occasions I was able to pitch in and help them get through the tasks at hand. Each day every frog is visually checked, his or her cage is cleaned, and on certain days vitamins and minerals are provided to keep the frog healthy. This is in addition to the days when all the greenery in the habitats is checked or replaced. The job sounded easy at first. Spot the frog, look it over, clean out the frog poop. Sounds simple right?  Now factor in the fact that these frogs are great at hiding and jumping and it suddenly becomes a much more complicated task! It seemed like I usually used one hand for keeping the frog in the enclosure, one for cleaning and one on standby in case my first hand failed (which it did a couple of times). You never knew you had three hands until you are taking care of frogs! 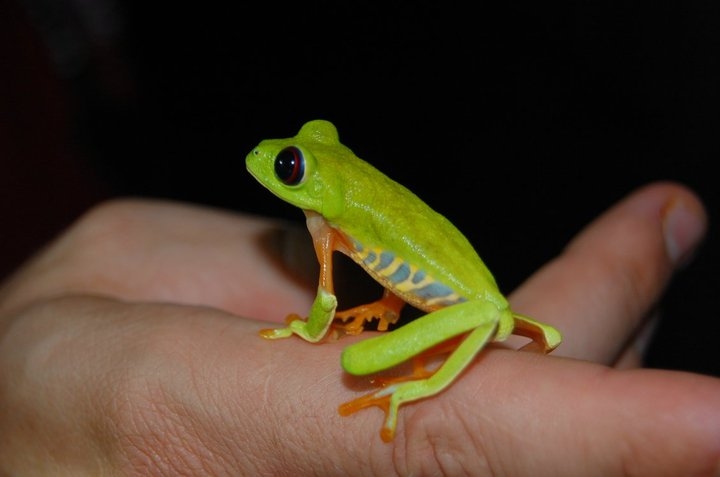 This red-eyed tree frog was among the frogs Jeff caught while volunteering in Panama.

Frogging: I was fortunate to be in Gamboa at the same time as project international coordinator, Dr. Brian Gratwicke, and Lindsay Renick Mayer, public affairs specialist for the Smithsonian’s National Zoo and all around frog-lover. So several nights we went out frog hunting. Frog hunting in the Panamanian rainforest often involves tramping around in the middle of marshes at night, wearing a tiny head lamp and trying to track down the call of one frog in the middle of a full-scale frog opera. Did I mention I am afraid of snakes? I did think to mention it when we were ankle deep in a marsh and Brian’s sound advice was: “Then try not to step on one.”

I am an interpreter in the Amazonia Exhibit at the Smithsonian’s National Zoo, so I have had the opportunity to learn a lot about frogs and enjoy talking to guests about them. There is a massive difference between pointing out frogs in a tank and chasing a one-inch frog through a marsh at night while your frogging team keeps yelling: “Don’t let it get away! Grab it, grab it!” It’s a whole new level of learning, let me tell you. It was an amazing opportunity to catch, photograph, learn about and release the frogs back into the wild. Along the way I learned more about their behaviors, calls and needs, which is all to the good.

Not just about frogs: When I first filled out my volunteer application I was convinced I would not be selected. I didn’t really have any animal husbandry background and my Spanish skills were limited, at best. What I learned is that the project needs people with all sorts of different skills–and skill levels–and that all you really have to have is a love of frogs. But the trip wasn’t just about frogs. It was also about people and cultures and sharing, learning and laughing. One evening after we finished working I was invited to visit the village of one of the project staff. Lanky is a member of the Wounaan tribe, a group of indigenous people who live along the Rio Chagres and it was a great honor to meet his family and see the combination of traditional lifestyle and forward thinking that this family group embraces.  Their thatched platform homes are very traditional, but use solar panels for lighting and electrical needs. 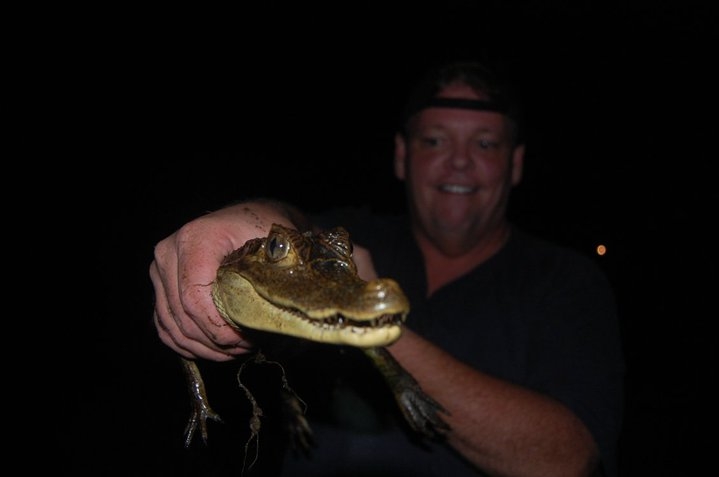 During a nightly frogging expedition, Jeff seized the opportunity to hold this caiman.

All of the staff made me feel welcome and actively contributed to my somewhat improved Spanish. While we couldn’t always communicate in long sentences, we could always find a way to get our meaning across and a smile is a language unto itself!

I also learned a lot about other types of animals that live in Panama. The project is located at the Summit Botanical Garden, which houses a large number of animals native to Panama. I was able to see harpy eagles (the national bird), tamarins, ocelots, monkeys, coatis and more. Our frogging adventures introduced me to all sorts of other animals.
Would I recommend it? How could I not? The phrase “life-changing” may sound cliché, but in this case is perfectly accurate. It’s an opportunity to make a real difference in a fun, beautiful, exciting and sometimes challenging environment!

—Jeff Coulter is a volunteer at Smithsonian’s National Zoo.

Interested in volunteering for the Panama Amphibian Rescue and Conservation Project? Apply now!