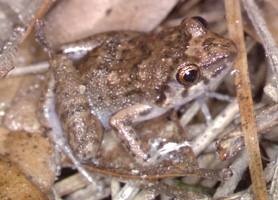 A group of researchers at the Smithsonian Tropical Research Institute confirmed this frog's identity as the "greenhouse frog," Eleutherodactylus planirostris. (Photo courtesy of STRI)

A team of dedicated amphibian caretakers, volunteers and Smithsonian scientists assembled their field gear, chytrid swab kits and swamp boots. Preparation was imperative for the week-long field expedition to the remote tropical rainforest in the Darien Province of eastern Panama. The team’s intention was to survey the site, still relatively untouched by fungal amphibian disease, and to collect individuals of species targeted for conservation at the captive rearing and breeding facility at the Smithsonian Tropical Research Institute (STRI). As had been the case in the last expeditions to these little-studied places, there was also a high probability of finding new species.

But storms made it impossible to land a plane at the site, so the trip was canceled. Disappointed, the team went back to work at the captive-breeding facility.

At the same time, another group of researchers at STRI identified another species of frog. Instead of being “new” to biology, this was an invader, native to the islands of the Caribbean, but new to Panama. In late 2008, herpetologists heard unusual calls in the gardens of suburban Panama City. A lack of local knowledge and individuals for comparison made definite identification difficult at first, so a genetic technique called DNA barcoding was employed to finally confirm the frogs’ identity as the “greenhouse frog,” Eleutherodactylus planirostris. Since then, many more individuals have been collected, confirming their presence.

DNA barcoding complements the more traditional techniques of identifying species based on body shape and size. Barcoding uses standardized snippets of mitochondrial genes that vary between species but not within individuals of the same species. DNA from the greenhouse frog was compared to sequences available in large worldwide databases like GenBank, kind of like matching the picture of a criminal to one of the faces in a line-up of suspects.

In 2010, a group of scientists working at STRI published a paper on amphibian diversity established using DNA barcoding. The paper and study came in the wake of massive frog species die-offs in central Panama caused by the fungal disease chytridiomycosis. “This is the first time that we’ve used genetic barcodes—DNA sequences unique to a given species—to characterize an entire amphibian community,” said Eldredge Bermingham, STRI director and co-author. “STRI has also done barcoding on this scale for tropical trees on in our forest dynamics-monitoring plot in Panama. The before-and-after approach we took with the frogs tells us exactly what was lost to this deadly disease in this area—33 percent of their evolutionary history.”

Applying a technique like barcoding in new places results in new knowledge and also raises many more questions than it answers.  What will the effect of the loss of so many frog species be on the insects that the frogs ate and on the snakes and birds that ate the frogs?  How did an invasive frog species arrive in Panama City from the Caribbean?  More updates soon….from Panama!