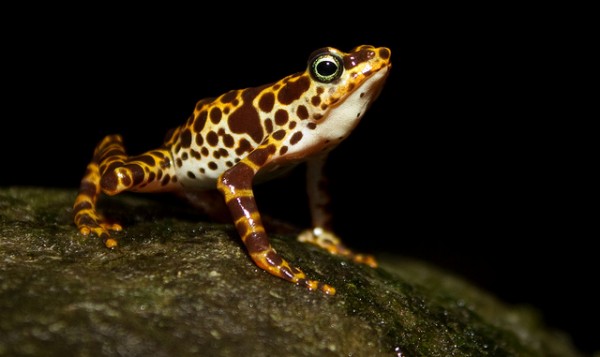 The toad mountain harlequin frog is all decked out in orange and black for Halloween! Atelopus certus is a biological treasure found only in Panama. This terrestrial species has a golden iridescent hue with spots like a giraffe. In its natural setting, the toad mountain harlequin frog can be found streamside or on mossy rocks in moist lowland and mountain forests.  We have a healthy population in captivity to safeguard against predicted chytridomycosis-related declines.

Atelopus certus  is endemic to Panama and identified only on a single mountain range in the south-western Darien region. Before 2011, this species was quite common within its small known range, and they were still abundant in 2013, but they are predicted to decline severely once chytridiomycosis arrives in that region. Thankfully, due to the swift action of the PARC project, Atelopus certus is being successfully reproduced in captivity. The Gamboa ARC has bred a very stable population

Did you know? The Smithsonian Channel documentary “Mission Critical: Amphibian Rescue” recounts the valiant rescue effort to save this species from imminent extinction.