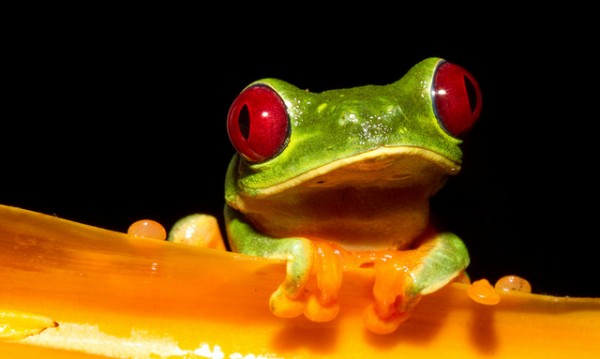 Beauty is in the eye of the beholder! The bright red eyes, and blue striped sides of Agalychnis callidryas are a defense mechanism the frog uses to surprise potential predators, and avoid predation. During the day the red-eyed tree frog folds its legs at its sides, closes its eyes, and sleeps, effectively camouflaging itself on green leaves. You can observe this behavior in their natural habitat  of low to mid-elevation rainforests from the Yucatan to Colombia.  They are considered a species of least concern according to the IUCN, and are abundant throughout their range. We also have these beauties on display in our exhibit Fabulous Frogs of Panama at Punta Culebra Nature Center.

Did you know? Red-eyed tree frogs lay their eggs on plants overhanging the wáter, and when they hatch the tadpoles fall into the wáter.  Eggs in the trees can be eaten by wasps, snakes, or katydids, or killed by pathogenic fungus. Embryos can hatch early to escape from attacks by egg predators and pathogens, or in response to abiotic threats, but they typically hatch later if undisturbed. Thus tadpoles enter the water at different ages, sizes and stages of development. Tadpoles that were induced to hatch early are more likely to be killed by aquatic predators and less likely to survive to metamorphosis. After a month or more in the water, the tadpoles metamorphose into froglets. Metamorphs on land remain relatively inactive near the pond while they absorb their tails, then climb up into the trees and disappear. We know very little about their lives as juveniles.