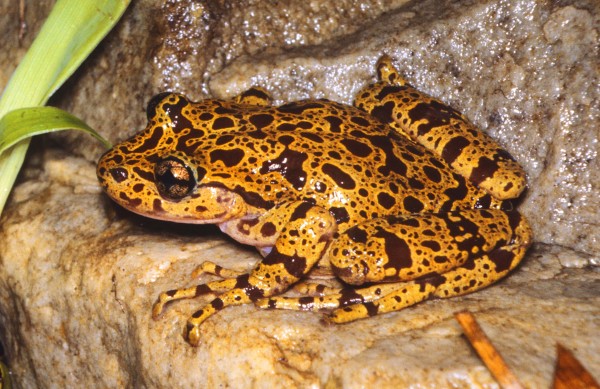 The Hewitt’s ghost frog is a medium-sized frog found in fast-flowing mountain rivers and streams in Eastern Cape Province, South Africa. As undetectable as a ghost, this frog’s flat body allows it to hide in confined spaces during the day, such as holes and rock cracks, and emerge during the night. It has long legs, big eyes, vertical pupils, and dark spots covering its entire body. Although the Hewitt’s ghost frog is a poor jumper, it is a skilled swimmer in strong currents and has abnormally large toes to cling to rocks by the water’s edge. Because of this frog’s mysterious nature, the extent of occurrence is considerably low. This fact, along with its small range and loss of habitat, has listed the Hewitt’s ghost frog as Endangered on the IUCN Red List of Threatened Species.