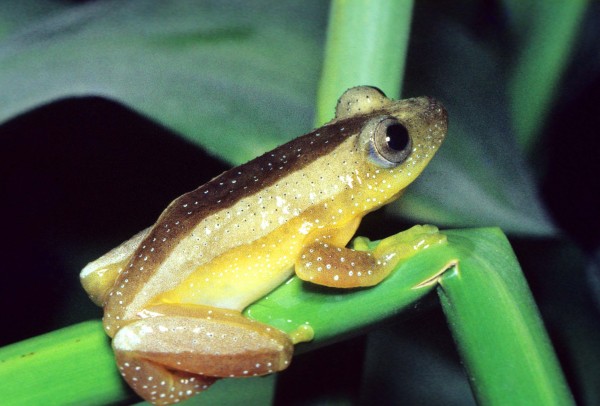 The Natal banana frog originates from coastal KwaZulu-Natal, South Africa. This frog is easily recognizable for its light and dark dorsal bands extending along the head and back, a rather constant design within the species, and rounded snout with black asperities. The Natal banana frog is often associated with low vegetation in shrubland and dry forest, but breed in wetland and temporary pools. It prefers emergent, long-leafed vegetation above water to build its egg nests. Recent loss of wetlands due to urban and recreational development, afforestation, agriculture expansion, pesticides and overgrazing livestock has resulted in a decline of the frog’s habitat and population. The IUCN has listed the Natal banana frog as Near Threatened on the IUCN Red List of Threatened Species.