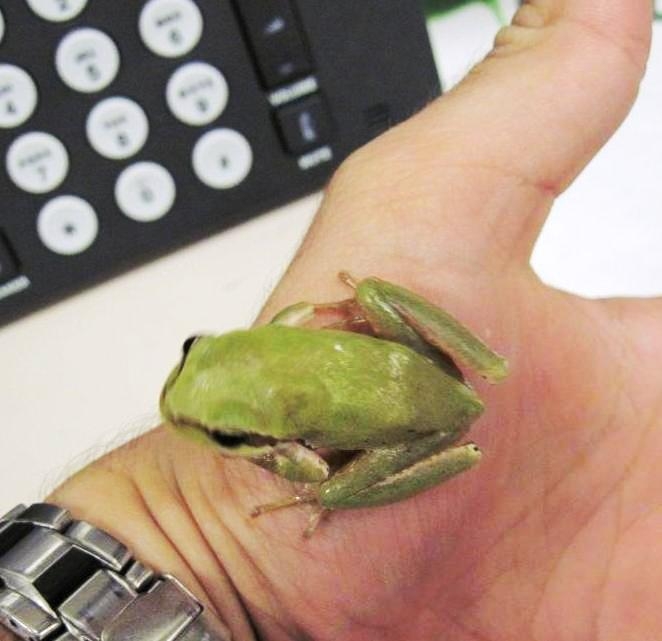 At the Port of Houston it is the job of U.S. Customs and Border Protection (CBP) agriculture specialists to intercept pests arriving in shipping containers from different parts of the world.  Not much surprises the CBP staff, but that changed on Sept. 16 when CBP agriculture specialists working at the Port of Houston’s Bayport Terminal opened up a shipping container that had arrived on a ship from the Middle East.

There, sitting quietly on a pallet of imported stone, was a tree frog.

Stan was happy to make the Houston Zoo the frog’s new home.  “Our research indicates that only one other zoo has this animal–the Dierenpark Emmen Zoo in the Netherlands and at last count they had 23 of them,” says Stan.

The frog showed no ill effects from its long trip in the dark from the Middle East.  “From what we were told by CBP staff, the container in which it was found was sealed shut in Syria and had not been opened until it arrived in Houston,” says Stan.

Released by CBP to Stan and Chris, the frog was taken to the Houston Zoo’s quarantine building where it made short work of what everyone assumed was its first decent meal in some time.  “On its first day in quarantine the frog consumed six crickets,” says Stan.

The intrepid traveler was moved from quarantine Nov. 9 to an off exhibit area at the Houston Zoo’s reptile house.  “He’s doing fine.  He’s big and healthy,” says Stan.

While the little frog may have surprised the CBP specialists, the Savigny’s tree frog is quite common in Iran, Iraq, Israel, Jordan, Lebanon, the island of Cyprus, the Republic of Georgia and Turkey.  “They’re the only tree frog found in Egypt,” says Stan.

They are native to deserts and semi-deserts and are found near water bodies such as oasis, gardens, bush lands and the edges of mountain forests.  The snout-to-vent length ranges between 30 to 47 mm.  The Savigny’s tree frog is probably one of the most heat-tolerant species of all the tree frogs, living in very hot and dry regions. When it isn’t their breeding season, these tree frogs are fairly inactive by day. In fact, they may sit motionless for hours, becoming active only in darkness. In the evening twilight, the frogs become active and start to forage and come to water bodies to rehydrate.

They hibernate on land from October until the beginning of November to March or April.  When they hibernate, they burrow in the soil and other hiding places. As tadpoles, they feed on plant and animal matter in the ponds where they hatched.  As adults, they feed on all sorts of insects.