Salamanders are remarkably enigmatic amphibians, both due to their often-cryptic colorations and their extremely secretive lifestyles. They are nocturnal, but even at night, one can hardly call them “active”. Many species are burrowing, and barely ever come out of their moist and dark haven created by earth and fungi. Other species prefer a life in the canopy of mysterious and often nearly inaccessible cloud forests, in a world dominated by bark, moss and lichen. 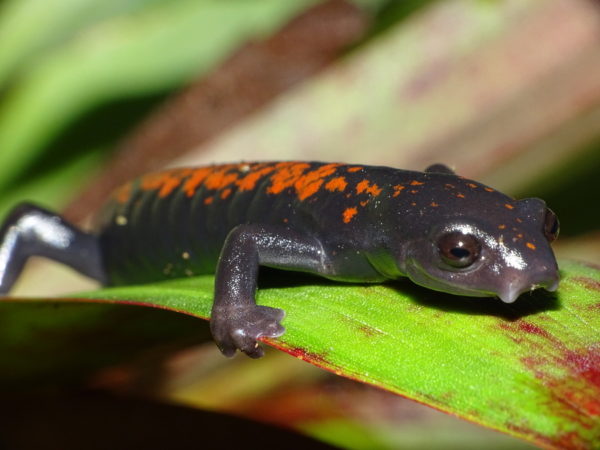 Panamanian salamanders are no exception to this rule. Herpetologists that set out to find them, regularly return after their tiring night-time missions without seeing even a trace of these wonderful creatures. Local people that work and live in areas where salamanders occur sometimes don’t even know of their existence – which is exactly why a handful of Panamanian institutions decided to organize the first International Festival of the Salamander.

The Festival took place from November 1 to 3 in Boquete, located right at the border of Volcan Barru National Park. Aptly, this is the place to be if one wants to set out on a nocturnal quest to look for them. During the days, there were photographic exhibitions, stands of the organizations involved, an interactive kids corner with movies and drawings for coloring and a small T-shirt shop, hosted by a team of volunteers that where sitting on the edge of their seats to tell you about their beloved salamanders.

A pet Boa constrictor juvenile named Oscar. One of the organizations had brought Oscar along to teach kids that although they remain wild animals, snakes can be quite gentle and docile too. © Leni Lammens.

But Friday and Saturday night, things even got better: every evening from 6 to 10 p.m., there was a free guided tour by Los Naturalistas in Volcan Barru National Park, with experts knowing where exactly chances of spotting one where highest.

The tour started off at the entrance of Volcan Barru National Park, where we met with a team of tour guides and biologists, led by Dr. Abel Batista. Then we drove on for another 3 km on a bumpy gravel road, until we were at a place known for its substantial salamander population. The first and most important part of the tour consisted of disinfecting boots and equipment, to avoid spreading diseases. After all, one of the major reasons of amphibian declines worldwide is an extremely infectious fungus, Batrachochytrium sp.. While harmless to us, for many amphibian species, it causes severe skin damage, leading to death of susceptible individuals. After sterilizing our shoes, we began measuring about a dozen environmental variables; humidity, temperature, elevation, etc.. In the meantime, the guides explained a few rules: avoid touching the animals, don’t shine too bright lights directly in their eyes and don’t take pictures of them for too long and preferably without flash.

Then, we started searching. The weather was cold, but very dry, and therefore, our subjects of interest would mostly be hiding in moist places, one of the guides explained. We adjusted our strategies accordingly, looking in small holes between rocks and gently turning branches to peer underneath. We slowly walked upwards, and over the course of 20 minutes, we had only progressed about a hundred meters. When we had nearly given up, one of the guides suddenly called us further on.

We hurried on, nearly running uphill. But with a great reward waiting for us: a nearly 20 cm long, female magnificent web-footed salamander (Bolitoglossa magnifica)  was cautiously watching us from underneath her hiding place – a thick, rotting branch covered with lichen, about a meter and a half away from the road. All excited, we had to take turns to take a look from the right angle, so you could see her. We all took a few pictures, then we stopped bothering her with our flashlights and left her in peace.

We started hiking down again, all the while scanning every hole and crevice.  We passed the cars, and soon after, someone else already shouted he had found another one. This one was more difficult to see, hiding in a small hole in between rocks and loose earth. We had barely gotten to the second, when a third one was found, and soon after even a fourth and fifth!

Biologist taking photographs of a salamander (left), while a guide in the back continues searching in other holes. (right) A magnificent web-footed salamander (Bolitoglossa magnifica) that found a hiding place behind a mushroom.

Despite the unfavorable weather conditions, our evening excursion turned out to be a great success, spotting 5 individuals of the endangered magnificent web-footed salamander in less than an hour and a half. We returned tired and quite hungry, but fully satisfied nonetheless.

Los Naturalistas are currently working on a salamander-focused guided tour, which will roughly follow a similar structure as the tour we could enjoy that night. They hope to organize a lot of similar events like the International Festival of the Salamander, to further raise awareness among tourists as well as Panamanians concerning these mysterious and intriguing animals. Salamanders are facing many threats, but in protected places like Volcan Barru National Park, they are thriving.

By Leni Lamens Herpetologist, biologist and intern at the Panama Amphibian Research and Conservation center, in collaboration with the Smithsonian Tropical Research Institute and Smithsonian National Zoological Park.

I would like to express my gratitude towards all organizing parties involved in the International Festival of the Salamander:

as well as to all sponsors, without which the Festival would not have been possible.