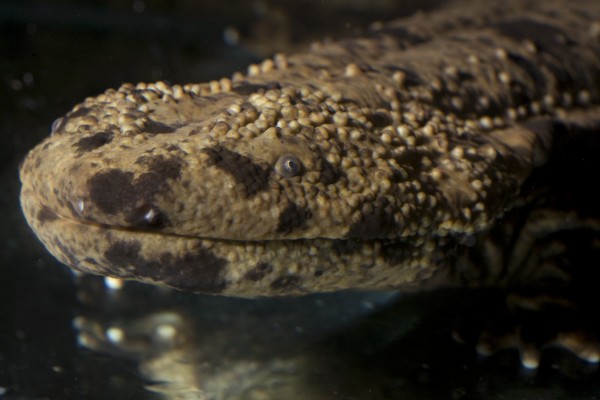 The Japanese giant salamander (Andrias japonicus), native to Japan, is the second largest salamander and can grow as large as five feet long. It lives and breeds in small to large rivers, preferring clear water, usually in forested areas. This species is characterized by its mottled appearance, tiny eyes, and warty skin making it seem more like the dinosaurs that have long been extinct. This salamander is definitely not a morning person–this species is purely nocturnal, meaning it is most active at night.

This species is the ultimate couch potato. Outside of the breeding season both males and females are largely sedentary. However, if attacked they will release a strong-smelling milky substance into the water with a smell resembling Japanese pepper, giving it the nickname “giant pepper fish.” This species is threatened by dam construction, the construction of artificial concrete riverbanks, and the alteration of river courses. At the current time the species is listed as near threatened by the IUCN.

Check out this Japanese giant salamander comic strip from the Smithsonian’s National Zoo!