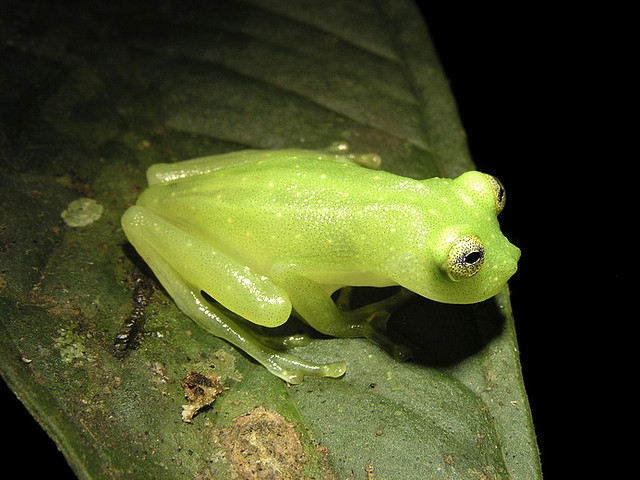 People often see the glass as half empty or half full, but this adorable little frog is clearly full…of cuteness! Living up to their name, adult cricket glass frogs chirp like crickets and have a lack of pigment in their skin that makes their abdomen appear as transparent as a window. Yes, by looking at them from the bottom, you can see their organs as if peering through a pane of glass. The rest of their bodies are more opaque, and lime-green in color with small yellowish dots, while the undersides of their arms and legs are white. These frogs also have prominent snouts and golden eyes that protrude from their faces.

Only the male frogs chirp, which sounds like the similar “brrrreeet” of a cricket, as they call to females. The males are very territorial, often wrestling with an intruder who threatens their turf, and whoever pins the other down is the victor and gains control of the spot. They are especially territorial during the entire duration of the breeding season from May to November, when they perch on the undersides of leaves in the same spots day after day, mainly along streams. The males often breed with multiple females but he will guard the eggs that they lay on his perch, although only at night. During the day, many get carried away by wasps and other predators, until he returns in the evening.

Cricket glass frogs have only been found in Costa Rica, Panama and Columbia. Although their habitats are threatened by deforestation, etc. this species is generally common and they are not considered endangered.