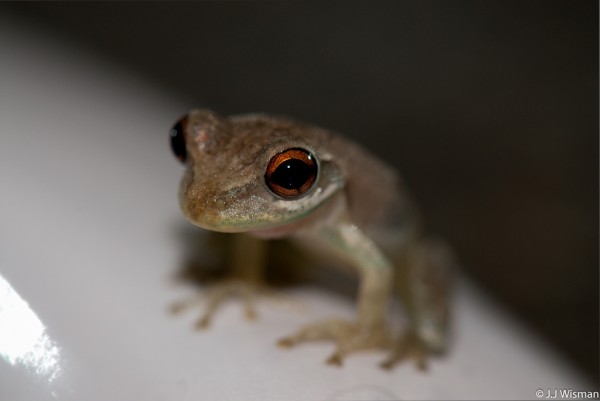 Named after Robert S. Johnstone, the Chief Justice of Grenada who helped aid in the collection of the first specimens in the early 20th century, the Johnstone’s whistling frog is the most widely distributed frog in the eastern Caribbean.

Small and non-distinct, these cute little guys are dull brownish-tan to grayish in color. Their eyes are golden-brown, and they have slightly darker ‘V’-shaped markings, also known as chevrons, on their shoulders.  Sometimes these frogs will also have a pair of darker dorsal stripes that run down their backs. Their legs have a darker blotchy or marbled pattern, and their fingers and toes are not webbed, but do have relatively large adhesive disks to help them climb. Males are also generally smaller than females.

Johnstone’s whistling frogs mate from around June to August, and the male’s whistling call has two notes: a quick lower note that rises sharply to a longer higher note. Parents will then guard the clutches of eggs that are laid for about 14 days before they hatch. Offspring mature via direct development within the egg, skipping the tadpole phase and emerge as tiny versions of the adults.

These frogs can be found on most of the Lesser Antillean islands in the Caribbean, including Anguilla, Barbados, Montserrat and St Lucia. They have also recently been introduced to Bermuda, Jamaica, Panama and Venezuela as stowaways on boats that travel to the different islands. They are not endangered and are highly adaptable to changing environments. So adaptable in places, that they may be becoming invasive and pushing native frogs out. Further research is needed to verify this, however.