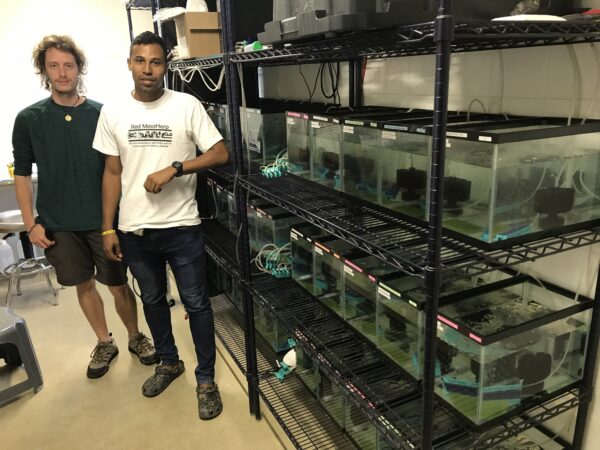 It’s dinnertime in Panama and the Summit Zoo Diner is a-hopping: frogs of different colors and different sizes line up to receive their three-course meal after tucking in their plastic bibs. They start with an appetizer of delectable springtails, wriggling to perfection. Then it’s on to the main course of live crickets, grown to size. This is all followed by dessert—recently bred fruit flies—served à la carte. When the frogs return to the perches on their leaves, their bellies are full and they have smiles on their faces.

So the bibs and smiles might be a stretch, but the end goal is the same for the Panama Amphibian Rescue and Conservation Project—to design a menu for each individual frog in captivity that ensures the frog will eat and thrive in its new home. Food preference, however, is only one of many variables that make feeding complicated. A dedicated team of frog whisperers—animal detectives who study the individual frogs to learn their unique habits, quirks, fears and needs—must consider the differences between frogs based on species, gender, age and size to plan the perfect menu.

“The frogs’ perception of the world is, in many aspects, at least as subtle as our own,” says Ed Smith, a biologist at the Smithsonian’s National Zoo who visited the Summit Zoo in Panama City, Panama, earlier this year to help develop husbandry protocols with project researchers. “These are living things and we all perceive the world in a special way; in a very particular way.”

Because many of the priority rescue species haven’t been studied extensively in captivity, project researchers start to learn about what the animals prefer to eat by providing the food that works for species that are closely related. They take into account the frog’s age and size, whether the frog will eat food its own size or items far smaller, if it’s nocturnal or active during the day, if it eats a big item once in a while or snacks on tiny treats throughout the day.

There may also be distractions that affect appetite, including environmental or social conditions: perhaps it’s too warm or too dry, maybe mating takes priority over food, or avoiding a suitor or a combative neighbor is keeping meals a secondary concern. Frogs can be finicky eaters—one might prefer springtails and soil mites to fruit flies and crickets, or grasshoppers, earthworms, or baby mice. Sometimes researchers can determine these traits only through trial and error. And tadpoles present their own challenges—a frog in the larval stage will eat entirely different food as the same frog as an adult.

The rescue project also has to look at external factors that could stress the frogs, causing them not to eat. This includes the design of each aquarium. “If I plucked you from your home and put you into a sterile cube of white walls with a white bottom and white ceiling and then all of the sudden dropped a hamburger in there, even an avid burger fan might not feel like eating,” Smith says. “You might want to make it look and feel more like home in order to reduce stress. A couch would be nice. A kitchen table wouldn’t be bad. Maybe a little bit of air conditioning.”

To give the aquariums a more natural feel, they are outfitted with plants and rocks that are put through a rigorous cleaning process so that the tanks remain biosecure. Animal keepers carefully monitor the temperature, humidity, water and light. Even the time of day that the auto-misters come on matters—baby crickets get stuck in water and die before the frogs can eat them, thus leaving cricket-loving frogs without breakfast, Smith says.

Focusing on the frogs is only the first part of the husbandry. To keep the frogs alive, the rescue project has to keep the frogs’ food alive and make sure the insects are reproducing. This can be especially challenging when crafty pests are after the same food, temperature plays a role in the success of breeding, and permits and documents needed to bring insect soufflé in take time to process. Some of the food stuff is collected out in the field, where researchers and volunteers use nets to sweep up what they can and pull out potential sustenance. 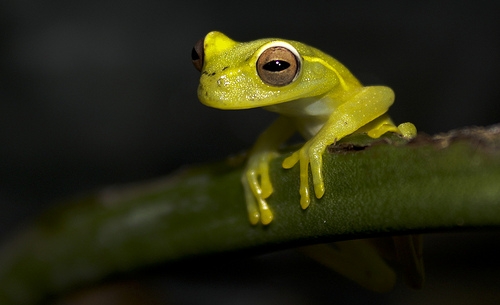 One little La Loma tree frog in captivity refused to eat for about a week and it wasn't until the lights went out that Smith and other rescue project members were able to solve the mystery. (Photo credit: Brian Gratwicke, Panama Amphibian Rescue and Conservation Project)

Sometimes, even after all of these factors are taken into account, a frog or two still refuses to eat for mysterious reasons. Such was the case for one little La Loma tree frog (Hyloscirtus colymba) during Smith’s time in Panama. It wasn’t until the lights had gone out that Smith and another worker noticed a stream of ants pour out of a piece of bamboo the frog used to perch on. According to Smith, the frog cowered in the corner as the ants raided its food. Although the project team had cleaned the bamboo, the ants were hiding securely between bamboo nodes.

“The name of the game is husbandry,” Smith says. “And husbandry skills are entirely about paying attention to the organism. The people I met who are involved with the project pay an amazing amount of attention to each individual animal. They know their frogs not just as a species, not as male or female, or as a number in a book. They know all of those things, of course, but they know them each as an individual. Serving dinner is relatively easy. Ensuring that it is eaten, however, is often achieved only with that level of understanding.”