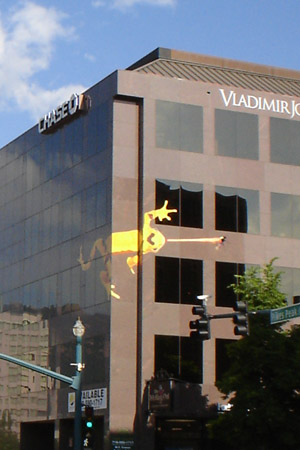 June 18th, 2009:  The rumor has been confirmed and in fact a giant Panamanian Golden Frog has taken up residence on the Chase Bank building located on the corner of Pikes Peak and Tejon – check it out! The frog will be up for three months.

We had a great media event earlier today, so watch for us on the news and in the paper. The event included the unveiling of the new Josh & John’s ice cream flavor, Panamanian Golden Fudge. They will rotate the flavor on their menu and 50% of the proceeds of this ice cream will be donated to the Cheyenne Mountain Zoo!