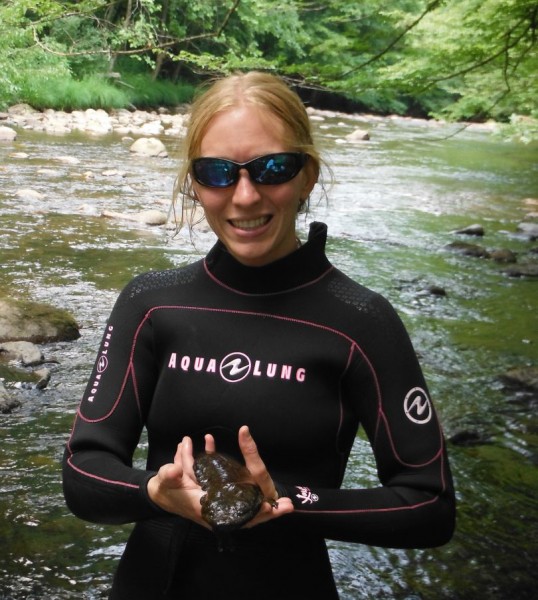 The National Zoo’s 2012 hellbender field season was a wild one! We had a high-energy mix of scientists, zoo keepers and volunteers in the field crew this year, including:

Brad Nissen, an intern in our Amphibian Research and Husbandry Program.

Dan Nissen, a retired hydrologist from the VA Dept of Environmental Quality (and Brad’s dad!).

Jeff Storey, a wildlife photographer and strongman (seriously – he plays in the Highland Games!).

Zoe Hore, a student from Newcastle, England (she wins the award for having traveled the farthest to get slimed by a hellbender).

JD Kleopfer, a biologist for the VA Dept of Game and Inland Fisheries and overall herpetological guru.

Altogether, our team put in about 400 hours of survey work and caught more than 100 hellbenders from nine different streams in Virginia, Pennsylvania, New York and Seneca Indian Territory. Every hellbender was released safely, all the samples made it back to the lab, and the crew survived without a single case of poison ivy (impressive, since during one trip I inadvertently set up the mobile lab in a clearing infested with hundreds of little tiny poison ivy sprouts). Below are a couple of highlights from our adventure-filled summer.

We began our season in the rolling hills of southwest Virginia (locations are undisclosed due to poaching risk). During the first three straight days of survey work, the crew had been bumped, bruised, drenched, pooped on, stung, pinched, covered in sweat, and driven to extreme mental frustration. We had conducted a completely unsuccessful night survey (hellbenders are nocturnal, after all) and had stayed up into the wee morning hours making emergency repairs on broken field equipment. We even woke up early one morning to trek up a mountain and visit a timber rattlesnake den (gotta love working with herpetologists!). After all this, any normal human would be ready to call it quits. Fortunately, my team of bionic super-humans lives for this kind of stuff. 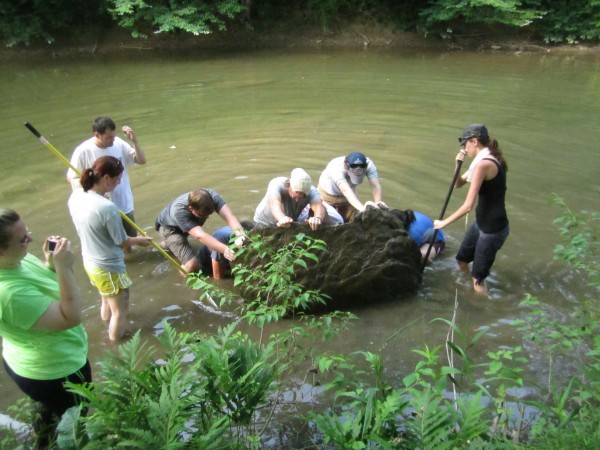 We woke up refreshed and ready for our fourth and final day of surveys in Virginia. We had been pretty successful in finding hellbenders thus far and had already collected our minimum number of samples, so we decided to try a new stream. Earlier in the trip I had struck up a conversation with a guy hanging out of a pickup truck in a Food City parking lot. He had seen the realistic hellbender model that I keep on the van dashboard and wanted to know where I got it (and, I think, whether it was taxidermied). He mentioned that he had some buddies who had caught some ‘benders at a fishing hole up the road, so we decided to check it out. But when we got there I started to have some doubts. Many of the big rocks were too embedded for anything to live under, and I started to feel like turning over each rock was just a formality before we could call it quits. There was no official record of hellbenders in this creek, and we were a good ways downstream from the fishing hole (which turned out to be just across the border into Tennessee, where I didn’t have a survey permit). But just when I was feeling like this was a complete waste of time, I reached under a rock and felt the soft, familiar squish of a hellbender. Yes!!! This catch was a big deal – it represented a new official record of a hellbender population in a state where the species has a very limited distribution. This kind of information is especially important right now because the Fish and Wildlife Service is considering this subspecies of hellbender (the eastern) as a candidate for endangered species listing. Knowing where a species occurs is the first step towards assessing its extinction risk. After another hour of searching we caught a second adult (a big fat one!) and a little juvenile. I couldn’t have imagined a better outcome – we found what appeared to be a high-density population with evidence of successful reproduction at a whole new site. What a fabulous way to end the trip!

Back on the road again! This time we were tagging along on someone else’s surveys (which meant I got to focus on the science instead of the planning and logistics – woo-hoo!).  The surveys were led by Eric Chapman from Western PA Conservancy, and he was accompanied by a large, incredibly enthusiastic field crew. Let’s just say that you don’t want to be a sociophobic hellbender in one of his streams. I was absolutely astounded by how quickly they worked and the size of the rocks they managed to lift. I had barely finished taking blood and skin swab samples from one hellbender when Eric’s team wrestled a second one into the net. At several points he had to tell them to stop and take a break because I couldn’t keep up. I was working quickly to try and get a blood sample within three minutes of capture, and in most cases we met this goal. That’s pretty good when you consider that we had to carry the hellbender back to our equipment, glove up, and roll its squirmy, slimy body into a wet towel (think hellbender burrito) before we could draw blood from the tail. 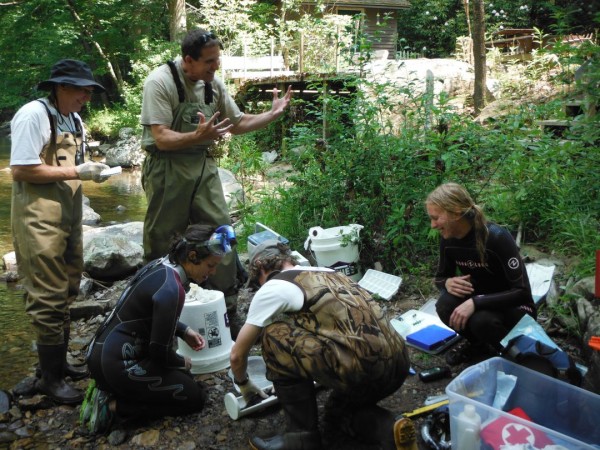 While I prepared the blood for freezing, Kurt Regester (a researcher from Clarion University) took samples to test for rana virus and chytrid fungus – two very lethal diseases in amphibians. Next, one of our field techs rubbed the skin with a special Q-tip to look for ‘good’ bacteria that might help protect the hellbender from disease (part of a study led by Andy Loudon from James Madison University). Lastly, Eric marked it with a microchip, the same kind the vet puts in your dog or cat. The chip allows him to identify individual hellbenders and to estimate the size of the population based on how often they’re recaptured. We’re definitely learning as much as possible about each hellbender we find. This winter I’ll be analyzing all of the frozen blood samples to determine how climate change and stream water quality impact hellbender health.

By the end of our first day in Pennsylvania, I was wiped. We’d caught an astounding 16 hellbenders (a new record for me) and a mudpuppy (bonus!).  Unbelievably, we had several other trips throughout the summer that were just as successful. But we also surveyed several sites where the hellbender populations didn’t appear to be reproducing (indicated by a complete absence of young animals). For a long-lived, slow-growing species like the hellbender, reproductive failure can be the first signpost on a path leading to extinction. I’m hopeful that our efforts, along with those of our state, university and NGO partners, can help determine why hellbenders are disappearing from certain areas and what we can do to protect a species that has roamed the earth since the time of the dinosaurs.

For additional updates, check out Kim’s blog on the National Zoo’s site.