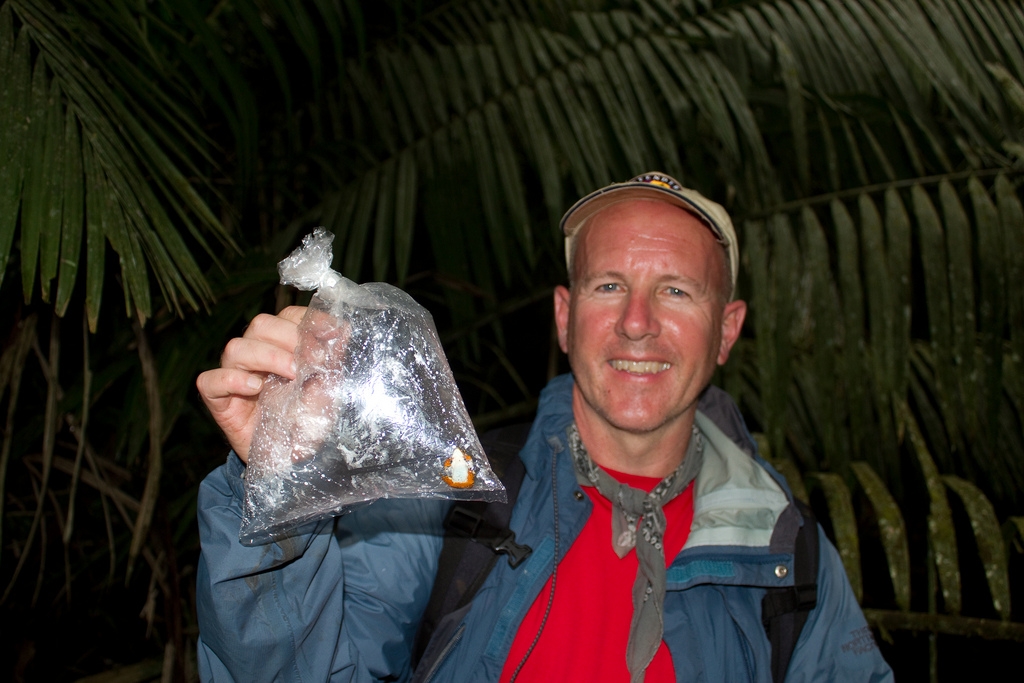 The toughest work week of my life. That’s how I described my Panama trip to colleagues at Defenders of Wildlife, after returning in late June from a week in the field with scientists from the amphibian rescue project. I was documenting their work for an upcoming story in Defenders magazine.

I got my first hint of how challenging the assignment would be when I first contacted project director Brian Gratwicke last winter about sending someone along on a rescue expedition. “Send us somebody young and fit!” he said. Youth is overrated, I told myself. I go to the gym regularly and hike, bike and kayak on weekends—so I qualified as fit. But just to be sure, several weeks before the trip I stepped up my workouts to a daily regimen of running and weight training, and lengthened my weekend hiking forays.

By the time I left for Panama in late June, I had lost several pounds and could comfortably carry a full backpack for an afternoon in the mountains near my home in Washington, D.C. Plus, this wasn’t my first such trip—on previous assignments I had accompanied field biologists as they tracked wolves in Idaho, wild cats in northern Mexico, and rare salamanders in the Appalachians.  How hard could this trip be?

Harder than I imagined.

The first day in the field began with a 3 a.m. wake-up call in Panama City, packing vehicles in the dark and then driving four-and-a half-hours into the Darien region of southern Panama—a place notorious for drug runners, armed rebels and assorted other outlaws. We were reminded of these hazards frequently, as dour, armed soldiers stopped us at checkpoints to look at our passports, examine our equipment and quiz us about our destination and intentions. By mid-morning, we reached a small port town and then transferred our gear into a motorboat for a two-hour trip to Garachine, a coastal village on the northwestern edge of Darien National Park.

In Garachine, we hired native Embera people as guides and porters, distributed most of our gear between them and their horses, and set out in the steamy early afternoon heat up the San Antonio River to our destination—Cerro Sapo, or Toad Mountain. Within an hour of starting our trek, my hiking boots had turned into muddy weights around my ankles—waterlogged from repeated river crossings and slathered in the brown ooze that passes for a trail in this area. Moving uphill into the jungle became harder, but I soldiered on, sweating through my shirt in the heat and humidity.

After about five hours of hiking, the trail ended—and the best way upriver was to literally go up the river. Hiking in the water was doable when the San Antonio was shallow and gravelly, but such placid stretches were rare as we moved up the mountain—they were interrupted frequently by slick, algae-covered boulders and stones; narrow, watery ledges next to deep pools; or impassable waterfalls, which had to be circumvented by hacking through trees, vines, palms and other vegetation in the surrounding jungle with machetes.

Then it got dark.

What had been a demanding hike now became dangerous. Even though we all had headlamps or flashlights, they couldn’t illuminate every slippery rock or deep pool or twisted vine. One misstep or slip could mean a badly twisted ankle or bruised limb—or much worse. And the nearest doctor was a six-hour hike back down the river. I gritted my teeth and swallowed my pride, carefully calibrating every step with my hiking pole like an octogenarian with a cane, or, when I didn’t trust my footing, sitting down and sliding over rocks or down muddy embankments on my backside. It couldn’t possibly get worse than this, I reasoned.

One of several poisonous fer de lance snakes encountered by the Cerro Sapo expedition team. The fer de lance is one of the most dangerous snakes in the world. (Photo courtesy of Mark Cheater, Defenders of Wildlife)

That’s when we saw the snake.

We were making one of our frequent bushwhacking forays around an impassable section of the river when one of our porters stopped suddenly and said “culebra!”—Spanish for ‘snake.’  It wasn’t just any snake that he had nearly stepped on. This yellowish-brown creature in the light of our headlamps was a fer de lance, one of the most dangerous snakes in the world. Edgardo Griffith, one of the biologists on the expedition, carefully moved the viper out of our path and into the darkness with his snake hook—a metal pole with a crook at the tip, around which snakes will instinctively wrap themselves. This particular fer de lance was a juvenile, he said, trying to reassure me. “It probably couldn’t kill you—you’d just lose the leg or arm where it bit you.”  I didn’t find much comfort in his words.

Finally, after what seemed like an eternity in the dark, we sloshed across a gentle section of the river and climbed about 50 feet up a steep, muddy embankment. There we found a slightly less steep, muddy section of jungle that had been cleared of vegetation and roofed with several blue plastic tarps suspended from nearby trees.  This was the Cerro Sapo base camp—our home for the next few days. Someone cooked up a dinner of rice and beans—the first real meal of the day. My stomach was in knots from the stress of the previous eight hours of hiking, but I reasoned that I should eat—and then discovered I could barely open my mouth because I had been clenching my teeth so tightly my jaw muscles had frozen.  I pushed a few spoonfuls into my gullet and collapsed in my tent.

What had I gotten myself into? Could I survive another four days of this? 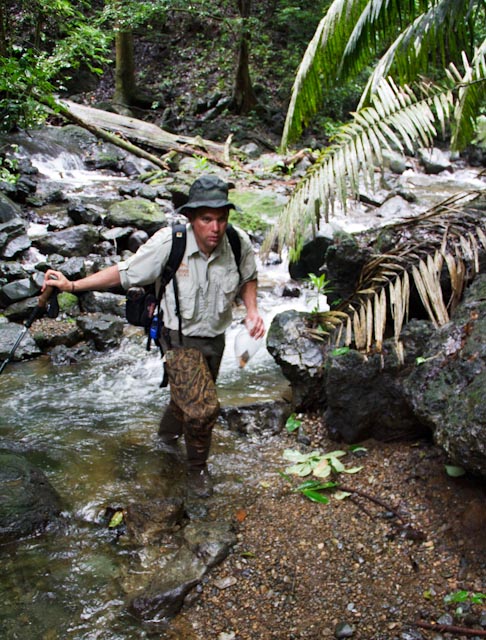 Bob Chastain of the Cheyenne Mountain Zoo searches for Toad Mountain harlequin frogs in and around the San Antonio River. (Photo courtesy of Mark Cheater, Defenders of Wildlife)

The short answer is that I did survive. The following days brought many more long difficult hikes upstream, finding and capturing the small, colorful harlequin frogs that were the focus of this rescue expedition. We encountered several more fer de lances along the way, along with whip scorpions and other large spiders, and a wide variety of biting ants, gnats, mosquitoes, midges and flies.  One or more of the biting insects attacked my feet, causing them to swell up to twice their normal size, adding a new challenge to the already difficult task of walking. And there was mud everywhere and on everything—on clothes, skin, equipment, dishes, utensils, tents.

But none of us got seriously injured or sick. And, despite the challenges we encountered in the jungle, we managed to bring back nearly 80 healthy Toad Mountain harlequin frogs to the rescue facility at Summit Zoo in Panama City. The frogs have proved to be free of the chytrid fungus that is devastating amphibians in so many other parts of Panama—and worldwide. Now begins the long task of breeding these animals and keeping them safe in captivity until a cure for the fungal epidemic is developed. If successful, Toad Mountain harlequin frogs may be spared the fate of the dozens of other species that have succumbed to the chytrid epidemic.

So, yes, it was the toughest week in my career—but also one of the most fascinating and rewarding.

Mark Cheater is editor of Defenders magazine, the quarterly membership magazine of Defenders of Wildlife. His story on the Cerro Sapo expedition is scheduled to run in the winter issue of the magazine.