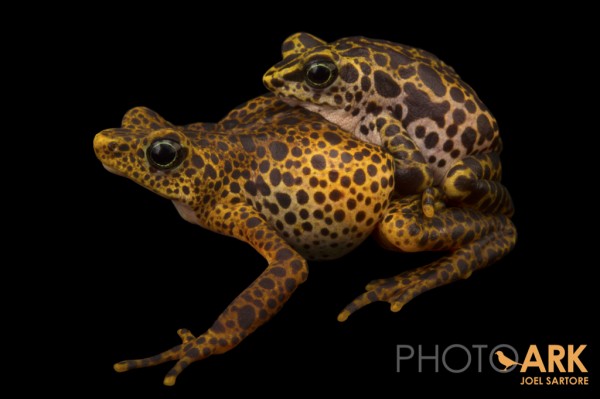 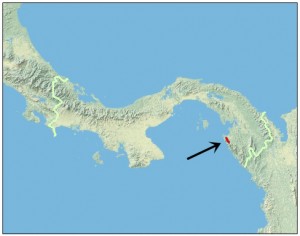 Atelopus certus, is endemic to Cerro Sapo (or Toad Mountain) in the Darien Region of eastern Panama, this is one of the most strikingly colored or all harlequin frogs.  Juveniles are metallic black and green, then become orange or red with black spots or reticulated markings as adults. The species occurs from 50 – 1150 m above sea level.

Status in the wild: Much of this species range is protected by the Darien National Park, a 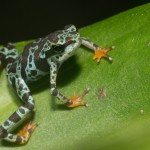 world Heritage site. However, this does not afford any protection from its main threat which is a fungal pathogen, Batrachochytrium dendrobatidis, (Bd).  This disease does not respect protected area boundaries and has wiped out more than 30 harlequin frog species in central and South America, particularly at higher elevation sites.  As of 2012, wild populations were still free from Bd, and are being closely monitored, but significant chytridiomycosis-related declines are anticipated, making the future outlook for this species in the wild poor. 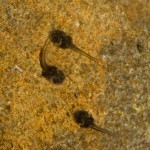 Status in captivity:  We have collected adequate founding populations of animals from a 250m elevation rainforest and from a 650m elevation cloud forest site. We have met our goals to establish a secure founding population (>20 male and 20 female) founders, and have numerous first generation offspring.  This species has bred well in captivity, at the Gamboa ARC.  The future outlook for the captive population is excellent. A documentary “Mission Critical: Amphibian Rescue” about this species was made for Smithsonian Networks and is available for download on itunes.