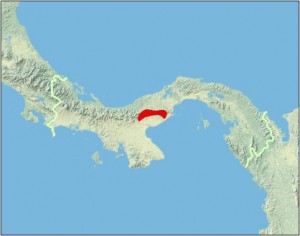 The Panamanian golden frog is endemic to Central Panama where it was historically found in the region surrounding El Valle de Anton and Campana National Park. This beautiful yellow and black frog is a dominant environmental and cultural symbol in Panama. In 2010 a law was passed in Panama declaring the Panamanian Golden Frog a national symbol as well as assigning August 14 National golden frog day. This annual event now includes many celebrations around the country, including parades in the streets of El Valle de Anton.

Status in the wild: This species used to be locally abundant at sites where it was present, but has experienced severe chytridiomycosis-related declines at all known remaining sites, and arrived in El Valle de Anton in 2006. The Panamanian golden frog was last recorded in the wild in 2009. The species has historically been collected for the pet trade. Recent housing developments, agriculture and road construction in the region were responsible for degrading golden frog habitats prior to the chytridiomycosis epidemic. Golden frog habitats continue to be impacted by land-use changes, and the amphibian chytrid fungus is still present. These two obstacles need to be overcome for planning successful future reintroduction programs. 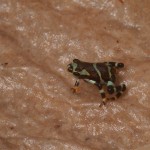