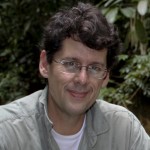 Roberto Ibáñez is the in-country Director of the Panama Amphibian Rescue and Conservation Project, based at the Smithsonian Tropical Research Institute, as well as appointed regional/country chair of the IUCN Species Survival Commission’s Amphibian Specialist Group, and elected member to the International Herpetological Committee of the World Congress of Herpetology.  He has been part-time Associate Professor at the Universidad de Panamá (1996-2013), and professor during de Panama Field Study Semester of McGill University (2003-2013).  He received his B.S. in Biology from the Universidad de Panama, and his Master’s degree and Ph.D. in Zoology from the Ecology and Evolutionary Biology Department at the University of Connecticut.  He was also an active supporter of The Research and Analysis Network for Neotropical Amphibians (RANA), and has been invited to participate in various amphibian conservation initiatives in Latin America.  He has studied the amphibians and reptiles of Panama for more than 30 years.  He has published more than 30 peer-reviewed papers, more than 20 notes, and a book guide to the amphibians of the lowlands of central Panama. 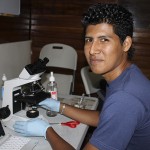 Jorge Guerrel, BSc, PARC Manager
Jorge has worked as an amphibian conservation biologist with the Panama Amphibian Rescue and Conservation Project since 2009. Jorge is outstanding in the field and he enjoys seeing amphibians in their native habitats, having participated in most of the project’s rescue expeditions. Jorge, is responsible for the overall captive management of species collected, overseeing quarantine, day-to-day husbandry, and developing breeding setups that mimic field conditions experienced by the frogs. Jorge’s current research interests include estimating populations of tadpoles that occur in captivity and developing methods to increase the survival rate of individuals, he looks forward to working on reintroduction programs. Prior to this position Jorge worked as a field biologist working for the society of Mammals of Panama (SOMASPA). He rescued and relocated of wildlife in the Panama Canal area and monitored amphibians of the cloud forest within El Parque Nacional Chagres. He has a degree in biology with orientation in environmental biology from the Universidad de Panamá. Jorge is interested in learning more about amphibians and continues studying to apply his field knowledge to conserve amphibians. 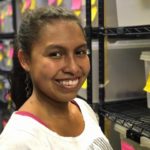 Nancy joined the Panama Amphibian Rescue and Conservation Project in 2010. She has a Bachelor in Biology, with and orientation in animal biology, and is the currently responsible for the breeding and maintenance of insects, used to feed the  frogs. She has worked in rescue and relocation of wild fauna, within the mining project located between the provinces of Colon and Cocle, Nancy is currently doing the final research for her Master’s thesis in Scientific Research Methodology. 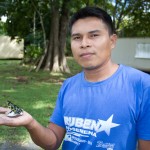 ucarama, Aide & Parataxonomist
Lanki joined the Panama Amphibian Rescue and Conservation Project in 2010. He helps with the day to day management of the collection, biosecurity and overall running of the facility. Lanki has a keen interest in the native wildlife of Panama and he is also our expert when it comes to collecting different species of plants for our terrariums, since he has a lot of first-hand experience in the surrounding forest. Lanki belongs to an indigenous group in Panama, the Wounaan. Proud of his culture, Lanki shares stories, language and his art with everybody at the project who shows an interest and if you are lucky, you can be invited back to see his village on the Chagres river. Lanky is an outstanding artist who works with tagua (vegetable ivory) carver and is adept at carving realistic-looking representations of the frogs in our amphibian collection. www.lankychart.blogspot.com