For frogs dying of the invasive chytridiomycosis disease, the leading cause of amphibian deaths worldwide, the genes responsible for protecting them may actually be leading to their demise, according to a new study published today in the journal Molecular Ecology by Smithsonian Conservation Biology Institute (SCBI) and University of Central Florida researchers. 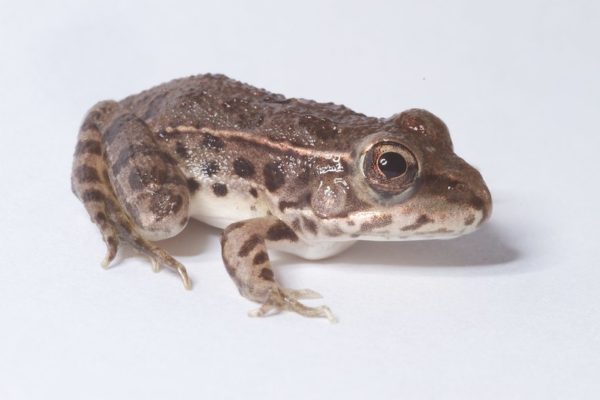 The lowland leopard frog, found in river drainages in Arizona, is one of a few amphibian species in which some individuals survive infection by Batrachochytrium dendrobatidis chytrid fungus (Bd) while other individuals do not—even when they live in the same local population.

In a study of lowland leopard frogs infected with Bd, the fungus that causes the disease chytridiomycosis or chytrid, researchers found that frogs that died from the disease had higher expression of major histocompatibility complex and other immune system genes than frogs that survived it. Those genes help organisms fight off infections and foreign substances.

“This result was totally counterintuitive and the opposite of the pattern we expected to recover,” said Anna Savage, the study’s lead author, an associate professor in UCF’s Department of Biology and former postdoctoral fellow at SCBI’s Center for Conservation Genomics (CCG).

Comparison of differential gene expression in control, early infected, surviving and susceptible frogs in both the spleen (left) and skin (right).

“My previous research on these immune genes showed that some variants were associated with higher survival to Batrachochytrium dendrobatidis, so I hypothesized that those genes were enabling the frogs to have a stronger immune response that would kill the fungus,” she said. “Instead, it seems like those stronger responses are linked to susceptibility, and the genes associating with survival are linked to reduced immune function.”

Savage said acquired immune responses can be very potent, require a lot of energy from the body and can sometimes produce toxic byproducts that harm the host and the pathogen.

“Immune responses are much more complex than just an on-off switch,” she said. “A big part of the immune system is regulating the type, timing and dosage of a particular response, and if any of those components get dysregulated, it can have extremely negative consequences.”

She said, for instance, Batrachochytrium dendrobatidis suppresses the host immune system by killing B and T lymphocytes. “Because those are the same cells that proliferate during acquired immune responses, producing lots of those cells might just be wasting energy on something that chytrid can easily destroy,” she said.

Amphibian populations are in decline around the world, with two-thirds of the world’s 8,000 species considered to be threatened and nearly 200 species that have already gone extinct in the last two decades. In the U.S., amphibian populations overall are declining at a rate of nearly 4 percent a year, with some areas, such as the Rocky Mountains and the West Coast, facing a higher rate of decline, according to the U.S. Geological Survey.

Although the researchers studied immune gene expression in lowland leopard frogs with chytridiomycosis, the findings may be useful for studying the disease in other frog species due to genetic similarities they share, Savage said.

Lowland leopard frogs were chosen for the study because their responses to chytridiomycosis vary from one individual to the next, unlike many other frog species that are completely susceptible to the disease or are completely resistant or tolerant.

This allowed the researchers to rule out genetic variation between species and pinpoint specific differences in lowland leopard frogs’ immune genes that predicted different responses to infection.

The frogs were collected in Arizona and shipped overnight to the Smithsonian’s National Zoo in Washington, D.C., where the infection experiments were conducted. Subsequent analyses of gene expression occurred at the SCBI’s Center for Conservation Genomics. Statistical analyses of the data were performed at UCF.

Robert Fleischer, senior scientist and head of the SCBI’s CCG, co-authored the study and was Savage’s main advisor for the research when she was a postdoctoral fellow at the Smithsonian. Fleischer said the results help in understanding why some frogs survive the disease and others do not.

“If we can solve this mystery, and we have taken a big step in that direction with this study, our hope and plan is to use this information to develop resources and strategies to mitigate the disease in the more susceptible species, and to counter the worldwide tide of extinction and endangerment caused by chytrid,” he said.

The researcher said the findings also show that acquired immune responses, such as those generated by vaccination, may not always be useful in combating invasive diseases of conservation concern.