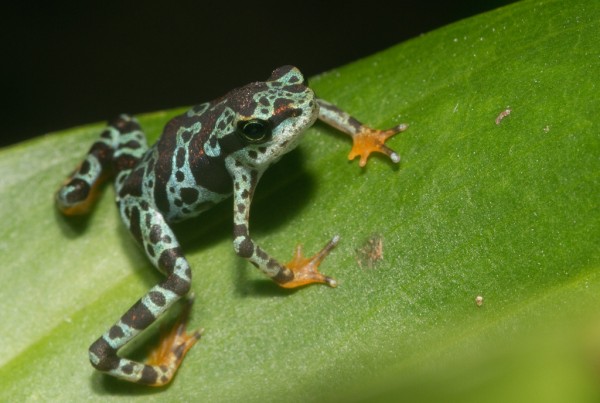 This new method could help us to test out new probiotic therapies. It can predict a captive-bred frog’s survival from exposure to chytrid fungus, without ever having to expose them to it experimentally.

Researchers at the University of Boulder Colorado, University of Zurich and Copenhagen University have developed a new method to predict how susceptible an amphibian is to a frog-killing fungus wiping out amphibians all over the world. The test looks at the antifungal properties of skin mucus that contains skin bacteria and chemicals secreted by the frog itself. Together the interactions between the skin bacteria and chemical secreted from glands on the frog skin are the frog’s first line of defense against skin disease.

Their paper, just published in PLOS One, sampled 8,500 frogs across Europe. They found that antifungal properties of the mucus were related to the prevalence of amphibian chytrid infection in natural populations. They found that when they experimentally exposed frogs to the chytrid fungus in a lab that they could predict survival of frogs based on an independent mucus sample. The researchers also found that when they added beneficial skin bacteria to the frogs that the anti-fungal properties of the skin were improved.

This study may help us to develop tools that we could use to reintroduce frogs back into areas affected by the frog-killing fungus, including Panama. “We have all these amphibians in captivity now, like the golden frog in Panama, a really beautiful species that is now extinct in the wild,” said Douglas Woodhams, a postdoctoral researcher at CU-Boulder and lead author of the paper. “We want to be able to reintroduce them, but the pathogen that attacked them is still out there,” he said. “Now we can determine what probiotic treatment might work best to protect the frogs without infecting them with the pathogen and seeing how many die.”