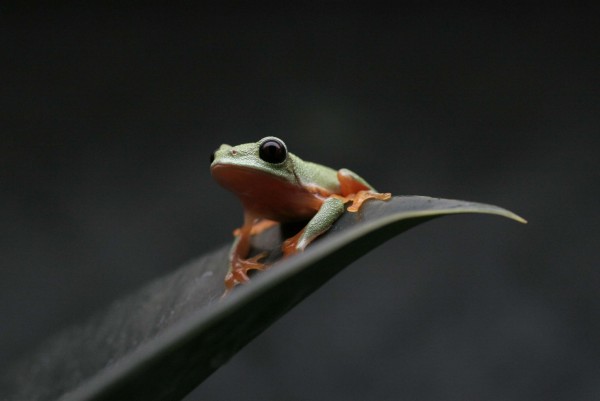 Also known as black-eyed leaf frogs, the Morelet’s tree frog is striking with its lime-green body, jet-black eyes, and vibrant orange underbelly. Found in moist, subtropical lowland rainforests and wetland habitats of Belize, Brazil, El Salvador, Guatemala, Honduras and Mexico, this small frog species thrives in pristine sub-tropical habitats with permanent bodies of water in which they can breed. During the summer months, they will breed and deposit clutches of 50 to 75 eggs on vegetation or rocks over water. When the eggs hatch, the larvae fall into the water to complete their development into frogs.

Sadly, the Morelet’s tree frog used to be abundant in Central America, but because of chytrid, the species is currently listed as critically endangered by the IUCN.

Photo by Victoria Ogilvy via Arkive.