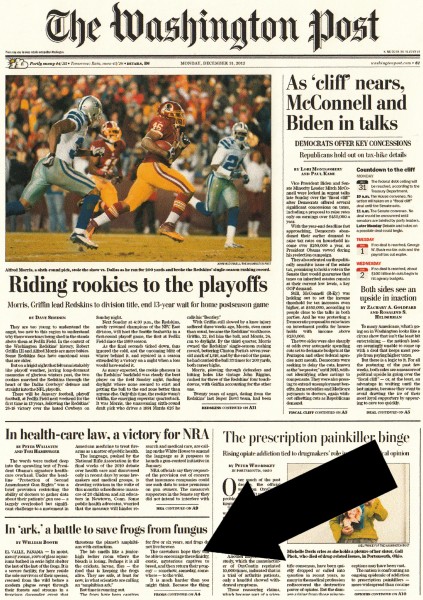 On Dec. 30, the Washington Post ran a front-page story about the rescue project.

The year ended on a high note for the Panama Amphibian Rescue and Conservation Project. William Booth, a science writer for the Washington Post, joined rescue project researchers on a field expedition and his story about the rescue project came out on the front page of the Post on Dec. 30. The story inspired one reader, Tim Torkildson, to share a lovely poem about frogs and the disease that is wiping them out.

Booth also did this NPR interview about his recent trip to Panama.

THE FROG
by Tim Torkildson

The frog is an amphibian
Who thrives most ev’rywhere,
From the dry Namibian
To just off ol’ Times Square.
The ones who have a bumpy skin,
With warts and pits and nodes,
Are the closest Phylum kin;
We simply call them toads.
The bullfrogs in the early spring
give ponds reverberation
With their raucous verbal fling,
Attempting procreation.
The have a courtship ritual
that’s called, I think, amplexus,
Which gives them fits conniptual
Between the two odd sexes.
A little boy will manage to
Corral a tadpole, yes,
And give it quite a slimy view
Right down his sister’s dress!
And did you know the urine from
a pregnant lady will
cause some frogs to lay a scum
of eggs, with no male thrill?
And so they’re useful critters,
As the French will tell you so;
Their legs taste good in fritters,
Are mistaken for turbot.
And what of cane toads, mind you,
Where, if you lick the skin,
The psychedelics blind you
To sorrow, grief and sin?
But frogs, those little gargoyles,
Which are funny in cartoons,
Are engaged in lethal broils
That leaves their lives in ruins.
A fungus known as “Bd” kills
The frogs down in Belize,
Then jumps the valleys and the hills
So others it may seize.
The Costa Rica Golden Toad
Is now extinct, alack.
More are headed down that road,
Since habitat is slack.
Toxins give some frogs three legs,
Which doesn’t help them jump.
Instead they are like clumsy kegs
Who in the water flump.
Scientists preserve some frogs
In habitats in labs.
Dressed in their starched, stiff white togs
They keep meticulous tabs.
To save the frogs, oh please donate
A dollar or a yuan,
So the polliwog birth rate
Will someday be a shoo-in!