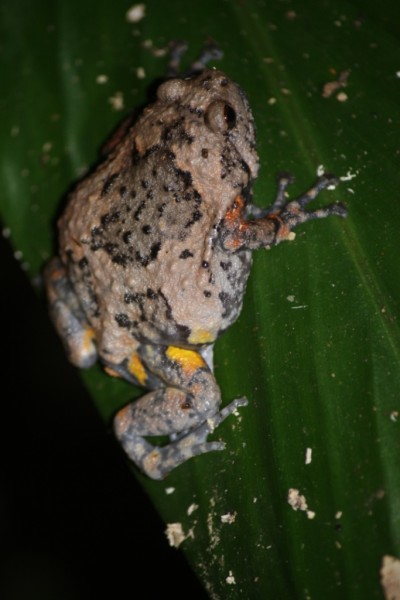 This brown bullfrog is one of a number of species that Houston Zoo and partners will be able to continue studying in Borneo thanks to this grant. (Photo courtesy of Houston Zoo)

The Houston Zoo and our partners at Hutan, Cardiff University and the Danau Girang Field Center (DGFC) were recently awarded a Conservation Endowment Fund (CEF) grant from the Association of Zoos and Aquariums (AZA).

The grant will allow the Zoo and our partners to build on the amazing work for the conservation of biodiversity that has been accomplished in Sabah in Borneo by Hutan and DGFC over the last few decades.

The primary threats in the area are the loss of primary and secondary forests to oil palm plantations. In 2008, Australian amphibian conservation biologist Dr. Graeme Gillespie began to work with Hutan and DGFC to include amphibians in their research and conservation programs.

Since 2008 they have intensively sampled the Lower Kinabatangan Wildlife Sanctuary and surrounding oil palm plantations to assess the amphibian fauna of the area. Results of the first phase were published in Biological Conservation earlier this year (Gillespie et al. 2012 152 (2012) 136–1440).

This grant will specifically address some of the questions relating to the value of the secondary forests for amphibian biodiversity by increasing the sampling done in primary areas. Once the dataset is assembled, we will be able to use this information to make additional recommendation for forest management.