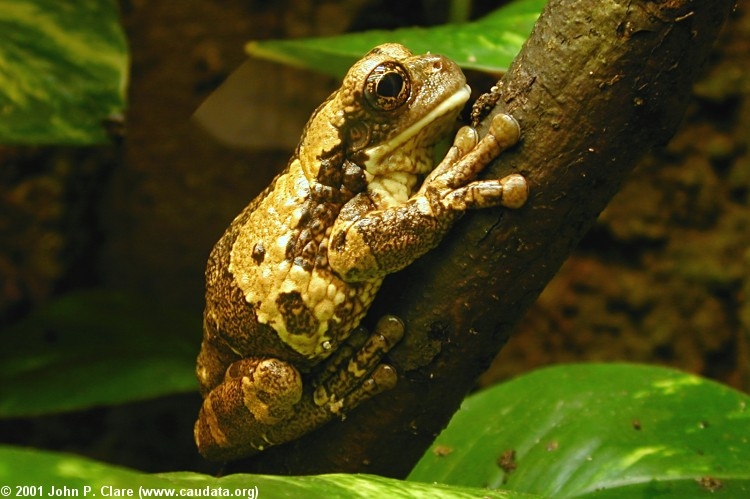 Unlike many specialized species that inhabit Panama, the pepper tree frog can live just about anywhere (and does) and expands the boundary of frog behavior. Listed all together, its attributes make for a compelling resume. If we start reading at the top of the list, we find out that it lives from Argentina’s savannahs to Mexico’s forest fragments, from Brazil’s Amazon rain forest to Colombia’s dry forest, and almost everywhere in between. It is as comfortable in the low coastal canopies as it is in tall trees 1.6 kilometers above sea level. Further down its resume, we come to learn about its swimming trick, in which it uses inflatable vocal sacks to float in shallow pools while calling for a mate. And a bit more impressive: it is a skilled parachutist, capable of gliding, not strictly falling, from canopy branches to the forest floor. The tadpole’s large gills and lungs are the evolutionary result of adapting to oxygen-depleted and warm small pools of water. Last but not least, we get to the trademark attribute. Its skin glands secrete sticky, noxious, and water-insoluble mucus at potential predators. Herpetologists (who wrote the list) have witnessed snakes recoiling from the stuff. In addition, its insolubility helps the frog’s porous skin remain moist during the dry season. Having reached the bottom of the long list, we come to realize just how deep and varied its resume is for a tree frog. Maybe adaptability explains its healthy global population. But why the “pepper” tree frog? The answer: its irritating mucus allegedly makes you sneeze as pepper does (according to reports in Belize).