The recent discovery of what may be three new frog species by researchers in Panama illustrates the hope and fear encountered daily by the Panama Amphibian Rescue and Conservation Project. The discoveries lead to hope that project researchers can save these animals from a deadly fungus killing frogs worldwide and the fear that many species will go extinct before scientists even know they exist. 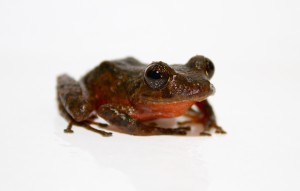 Two of the three potentially new species is a rain frog from the genus Pristimantis. The species pictured here has a bright red stomach that is uncharacteristic for rain frogs, earning it the nickname “red tomato.” (Credit: Brian Gratwicke, Panama Amphibian Rescue and Conservation Project)

“It is disturbing to witness the disappearance of species that some of us only recently described and even more devastating to lose those we know are probably new species,” said Roberto Ibáñez, local director of the project and a scientist at the Smithsonian Tropical Research Institute, one of nine project partners. “Scientists are just starting to investigate the ecological impact of the loss of amphibians, and while we’re aiming to preserve some of these species, we already know it will be impossible to save them all.”

Nearly one-third of all amphibian species globally are at the risk of going extinct. The rescue project aims to save more than 20 species of frogs in Panama, which is one of the world’s last strongholds for amphibian biodiversity. While the global amphibian crisis is the result of habitat loss, climate change and pollution, the deadly amphibian chytrid fungus is likely at least partly responsible for the disappearances of 94 of the 120 frog species that are thought to have gone extinct since 1980.

Although it can take years to determine that a species is new to science, project researchers have identified some telltale signs indicating that the three species found in eastern Panama are, indeed, new. The first two are rain frogs from the genus Pristimantis. One of these species has a bright red stomach that is uncharacteristic for rain frogs, earning it the nickname “red tomato.” The second species is much larger than any known Pristimantis in the region. The third frog species appears to be a robber frog, genus Craugastor, but unique skin folds on its arms and feet distinguish it from other closely related species. Robber frogs are especially susceptible to chytrid. 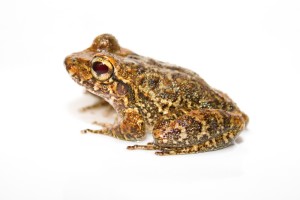 One of the three potentially new species appears to be a robber frog, genus Craugastor, shown here. The unique skin folds on its arms and feet distinguish it from other closely related species. Robber frogs are especially susceptible to chytrid. (Credit: Brian Gratwicke, Smithsonian Conservation Biology Institute)

A new study by Andrew Crawford, a STRI research associate, and colleagues reveals that many frog species at a site in western Panama have gone extinct before researchers knew they existed. The project’s three potentially new species are evidence of the same story playing out right now in the mountains of eastern Panama. Researchers have brought a handful of animals of each species back to the Summit Municipal Park in Panama City, Panama, where the project has turned used shipping containers into amphibian rescue pods.

“We are doing our best to salvage what we can, but we are in urgent need of funding to build capacity in Panama to house all of these chytrid refugees,” said Brian Gratwicke, a National Zoo research biologist and the international coordinator for the Panama Amphibian Rescue and Conservation Project. “The species is the basic unit of conservation, so these discoveries are rewarding, but that comes with the daunting responsibility of deciding how we look after them. We already have a huge job, and it just gets bigger with every discovery.”

Now project scientists will use collections of frogs from the same region at the Smithsonian’s Natural History Museum and elsewhere to determine if these species are genuinely new or if they have already been discovered (or “described”) elsewhere. The project has also collected tissue sample to use DNA testing to map out the animals’ closest genetic relatives.

“Finding a new species is like discovering a new Pablo Picasso,” said Gratwicke. “Each species is a priceless creation painted with the brushstrokes of natural selection on the canvas of DNA and has something of value to offer. We might not know how they’re valuable to us right now, but if they go extinct, we lose the opportunity to learn what secrets they hold.”

The mission of the Panama Amphibian Rescue and Conservation Project is to rescue amphibian species that are in extreme danger of extinction throughout Panama. The project’s efforts and expertise are focused on establishing assurance colonies and developing methodologies to reduce the impact of the amphibian chytrid fungus so that one day captive amphibians may be re-introduced to the wild. Project participants include Africam Safari, Autoridad Nacional del Ambiente, Cheyenne Mountain Zoo, Defenders of Wildlife, El Valle Amphibian Conservation Center, Houston Zoo, Smithsonian’s National Zoological Park, Smithsonian Tropical Research Institute, Summit Municipal Park and Zoo New England.