Lemur is Latin for “spirit” or “ghost.” The lemur frog is so named because of its nocturnal tendencies and, some might say, its ghoulishly bulging eyes. Rather than hopping, this leaf frog uses its thin arms and legs to slowly climb hand over hand towards its prey, spiriting its target away in the dark of night. Seems this little guy may have been a good companion for trick-or-treating! Unfortunately, the lemur frog is endangered, and many of its Western populations in Panama have been wiped out by chytridiomycosis.  There’s a chance its spirit may be all that’s left some day. 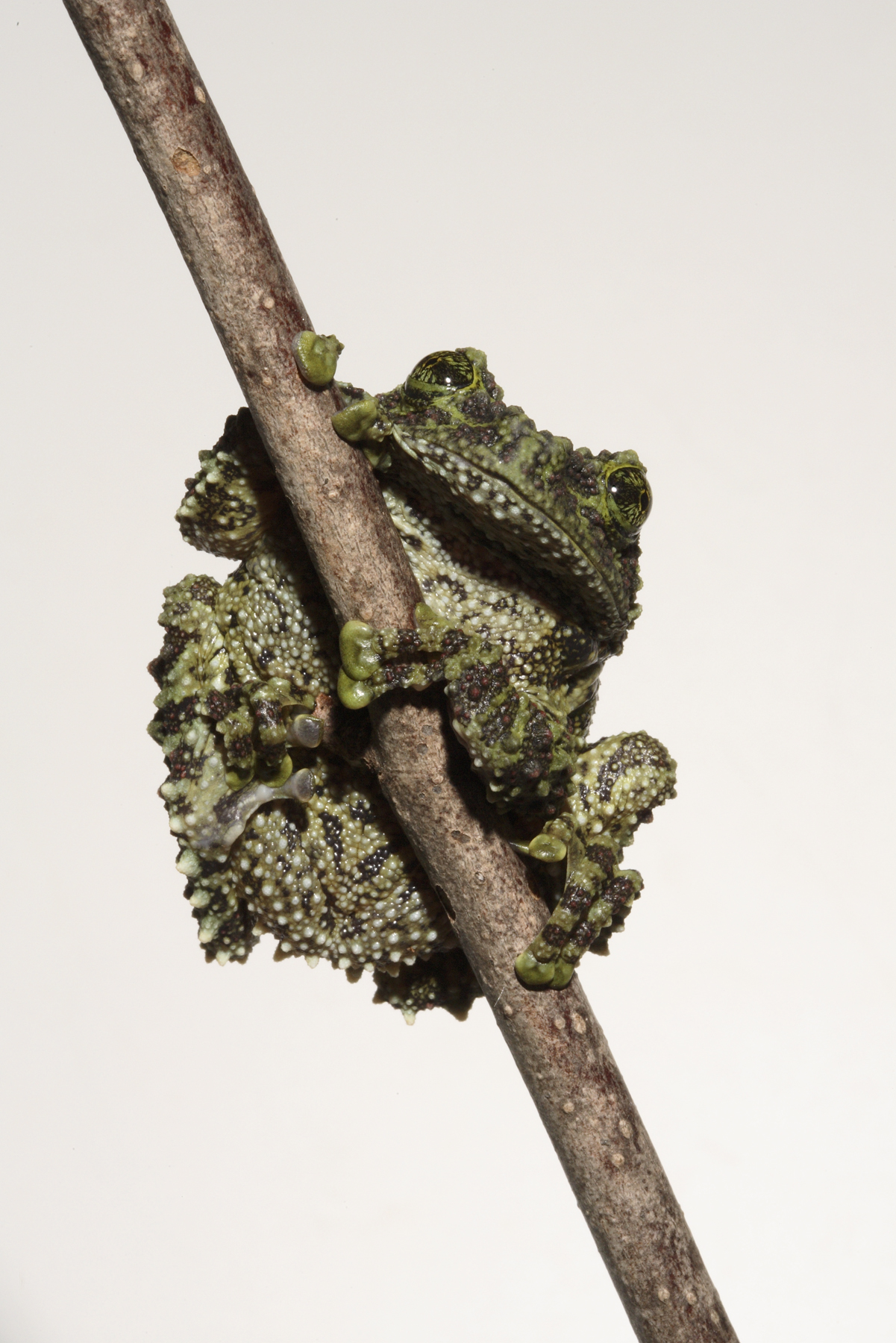 The  Vietnamese mossy frog possesses what is thought by some to be the most elaborate camouflage in the entire animal kingdom. Its uneven, bumpy and multi-colored skin is designed to make this frog resemble moss or lichen. By simply remaining immobile, this frog can blend almost perfectly with its surroundings and go undetected by predators. And if that was not protection enough, this little frog has one last trick up its sleeve. When frightened, the Vietnamese mossy frog will curl up in a ball and pretend it is dead to avoid further harm.

When it is time to reproduce, the female will lay her eggs on a rock or leaf just above the surface of the water to keep them out of reach of aquatic predators. When the eggs hatch, the larvae will fall from the eggs into the water and change from tadpole to adult in about one year.

With a wide grin and joyful expression, it is clear why the White’s tree frog would be nicknamed the “smiling tree frog.” These adorable frogs are gentle animals with a calm temperament. Even though they are able to jump, this is rare unless they are startled. Their diet typically consists of insects and spiders, and when they eat, they use their front feet to shove it into their mouth. These frogs have a fat, flabby body shape, earning them yet another seemingly apt nickname: the “dumpy tree frog.” The fatty ridges over their eyes change shape with weight gain or loss and when they eat too much, these ridges can get so large that they cover the frog’s eyes. 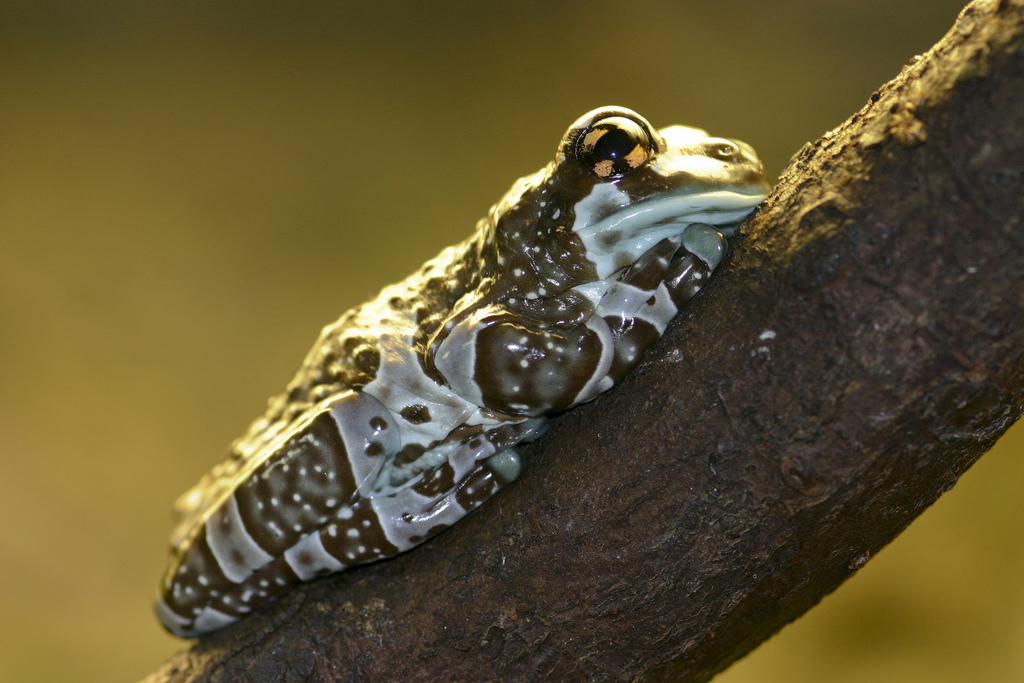 Also known as the mission golden-eyed tree frog or blue milk frog, the Amazon milk frog (Trachycephalus resinifictrix) makes its home in South America where it lives above or near slow-moving water in humid rain forests. Its name comes from the toxic milky-white substance it secretes from its body when it feels threatened. The substance is designed to deter predators but can also help the milk frog stay hydrated. One of the largest tree frogs in South America, the males can grow up to 4 inches long and the females can grow up to 4.5 inches.

Typical of the tree frog species, the milk frog has large finger disks that help it adhere to the slippery plant surfaces—a talent that certainly comes in handy during the daytime when the frog is sleeping among the rainforest foliage and hiding from predators. At night, after the sun goes down, the milk frog emerges to hunt for nocturnal insects that it can devour for a tasty meal. 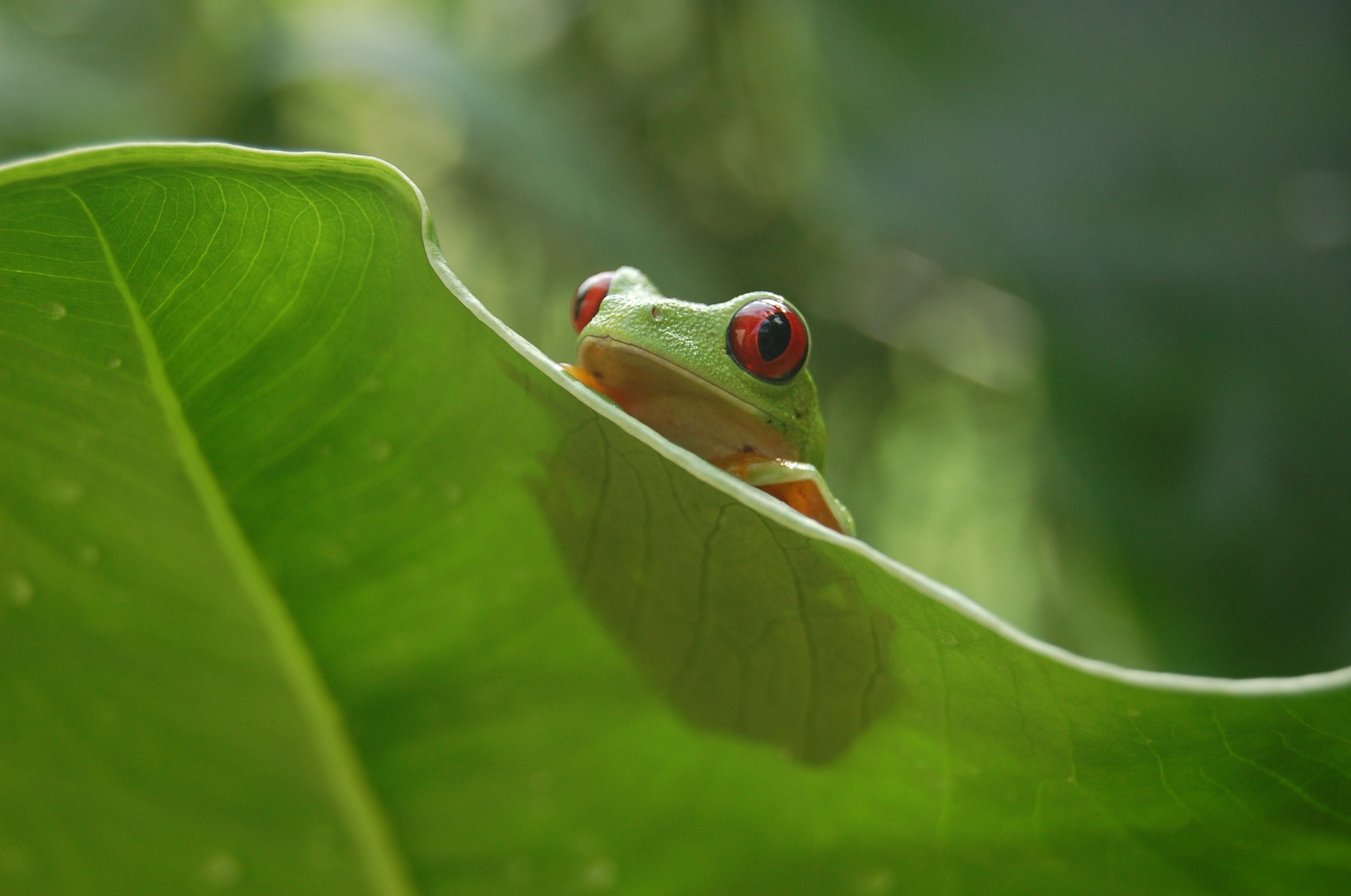 Did you know that the red-eyed tree frog can jump up to twenty times its own body length? That would be like a human jumping across the width of two basketball courts in one leap!

This unique frog with its bulging red eyes, flashy orange feet, and blue and yellow streaked sides makes for a stunning sight. Its colors may suggest that it’s venomous, but it actually uses the markings to startle predators. While sleeping during the day, the frog uses suction cups on its toes to stick to the bottom of leafs and poses in such a way that the colorings are hidden. When a predator comes upon the frog, the frog opens its eyes and unfolds its body to unveil the vivid markings. This technique, called “startle coloration,” happens in an instant and may make a bird or snake hesitate, giving the frog an opportunity to escape.

In addition to sleeping on the underside of leaves, red-eyed tree frogs lay clutches of eggs underneath leaves that are directly above a water source. The frogs’ embryos can sense when a predator is about to attack. They can prematurely hatch within seconds to avoid being eaten and drop safely into the river below. When the eggs hatch, the fluid from inside the eggs helps wash the tadpoles down into the water. It takes about sixteen weeks for these tadpoles to become full-grown adults.

The La Loma tree frog (Hyloscitrus colymba) peering over the lip of this glass with its startling brown eyes is usually too shy to come out and play in the wild. They hide themselves under large boulders near briskly flowing streams, where they make their homes. These frogs will not give up any hints about their whereabouts in the wild. If they sense an animal is near or they hear a disturbance, their chip-like call will quickly fall silent. They also prove that boys are not braver than girls; male La Loma tree frogs are especially shy, more so than females. These tiny frogs are so elusive scientists cannot be sure where to draw the borders designating their natural range in the wild. The lower forests of Costa Rica and Panama’s mountains are where researchers have found the La Loma tree frog, but there is speculation that it may also call Colombia home. 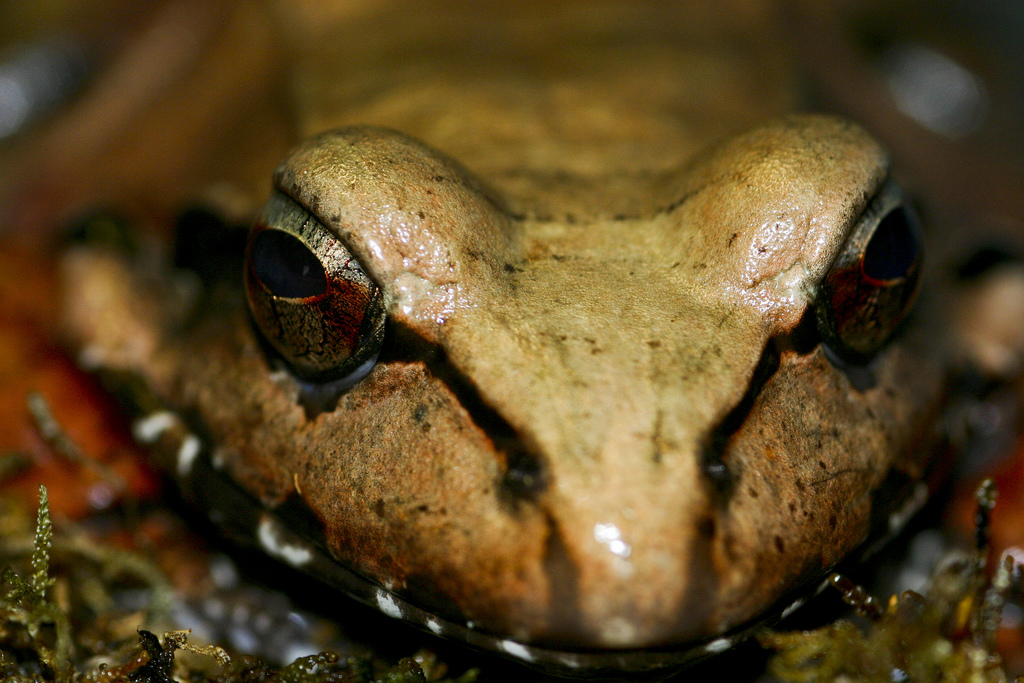 If you’re slightly frightened by this guy, then you might just have the right idea.

Sure, they may look harmless when you come across one, but don’t be fooled—smoky jungle frogs are far from defenseless. They are one of the largest frog species, and their skin contains a toxin that causes painful burning when it comes in contact with cuts or scrapes. If the frog is handled in an enclosed room, the toxins will cause everyone in the room to break out into sneezes, and will cause their eyes to swell and noses to run. The toxin also produces a strong and pungent odor, which some of the rescue project’s members recently discovered the hard way.

These frogs are also avid carnivores, feeding on things from frogs and lizards to small birds and mammals, and even large invertebrates.

To hear the alarming sound these frogs make when feeling threatened, check out this video from the BBC. 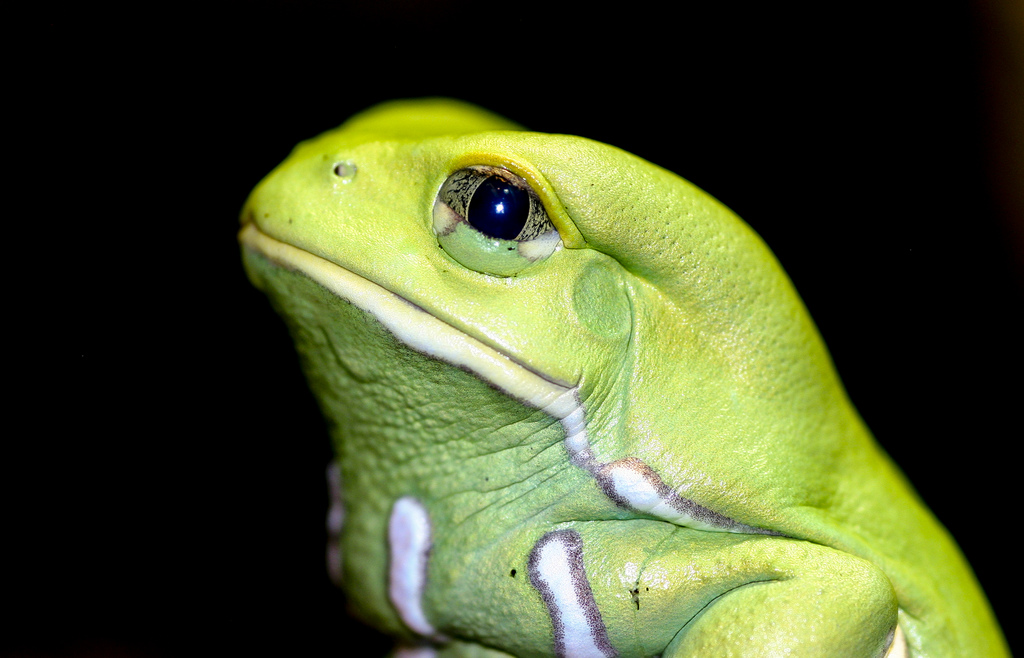 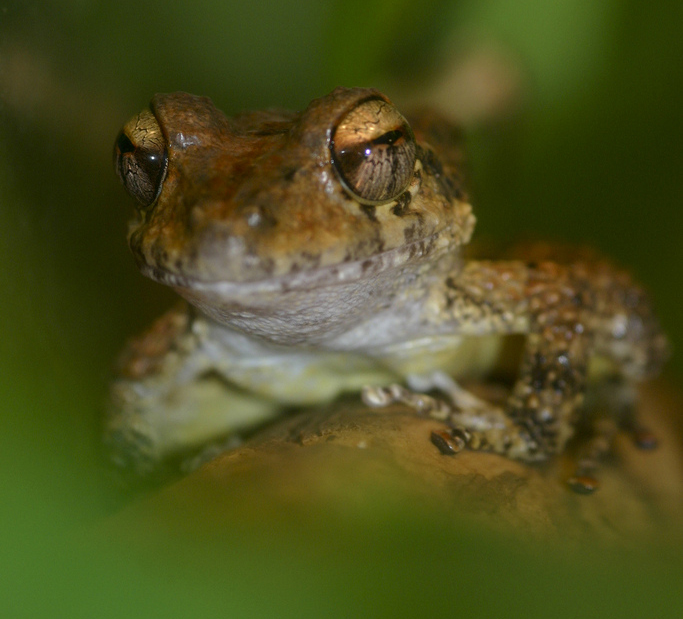 This frog really knows how to pose for the camera, huh? Commonly known as Bob’s robber frog, these little guys breed by direct development, which means that when Bob’s robber frogs are born, they pop out as kid frogs instead of baby tadpoles. These frogs are semi-aquatic species, so they get the best of the terrestrial and aquatic worlds, living in and near forest streams. But this flexibility has not helped them survive the impacts of development. Their favorite places are declining in size and quality in Panama, so much so that they’re considered endangered by the IUCN. 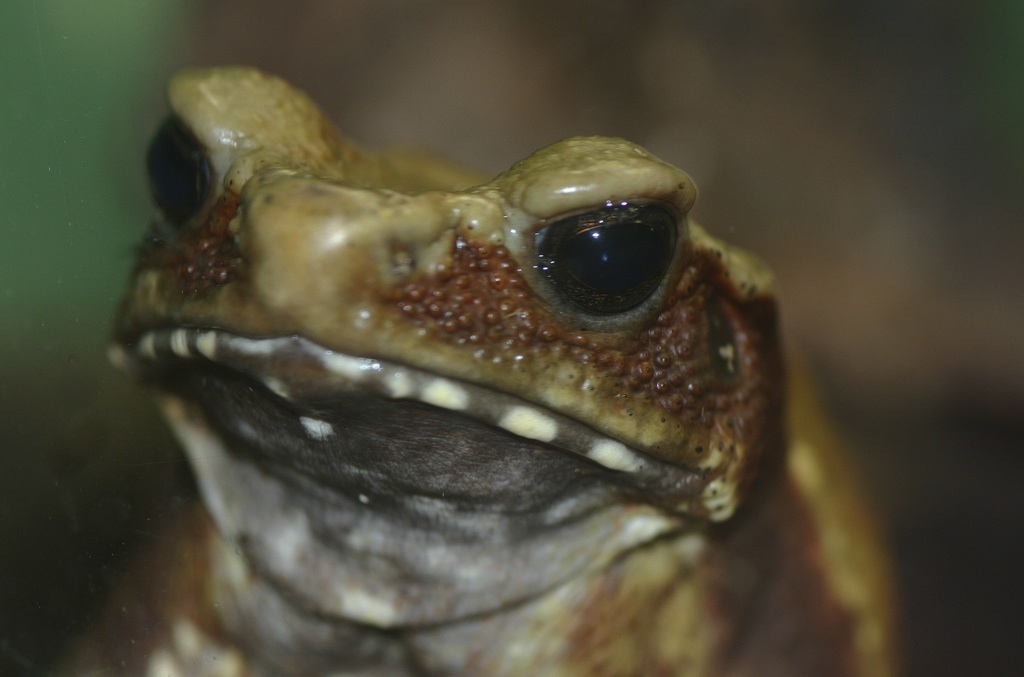 Sure they may be unpopular with Disney princesses, but smooth-sided toads can have quite the effect on a heart. These toads’ parotid glands produce a toxin that, when ingested by predators, interferes with the predator’s heart and can cause it to fail. Smooth-sided toads also inflate their bodies as a form of defense.

Unlike frogs, toads have short limbs, dry skin and no teeth.