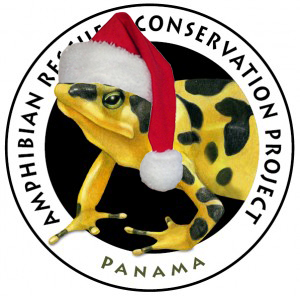 We are grateful for all of the support that we have received this year and look forward to another terrific year of saving some of Mother Nature’s most valuable gifts.

If you’re feeling in the holiday spirit, please consider giving frogs a little boost by:

Happy holidays from the Panama Amphibian Rescue and Conservation Project!

The story of “The deer and the frog” 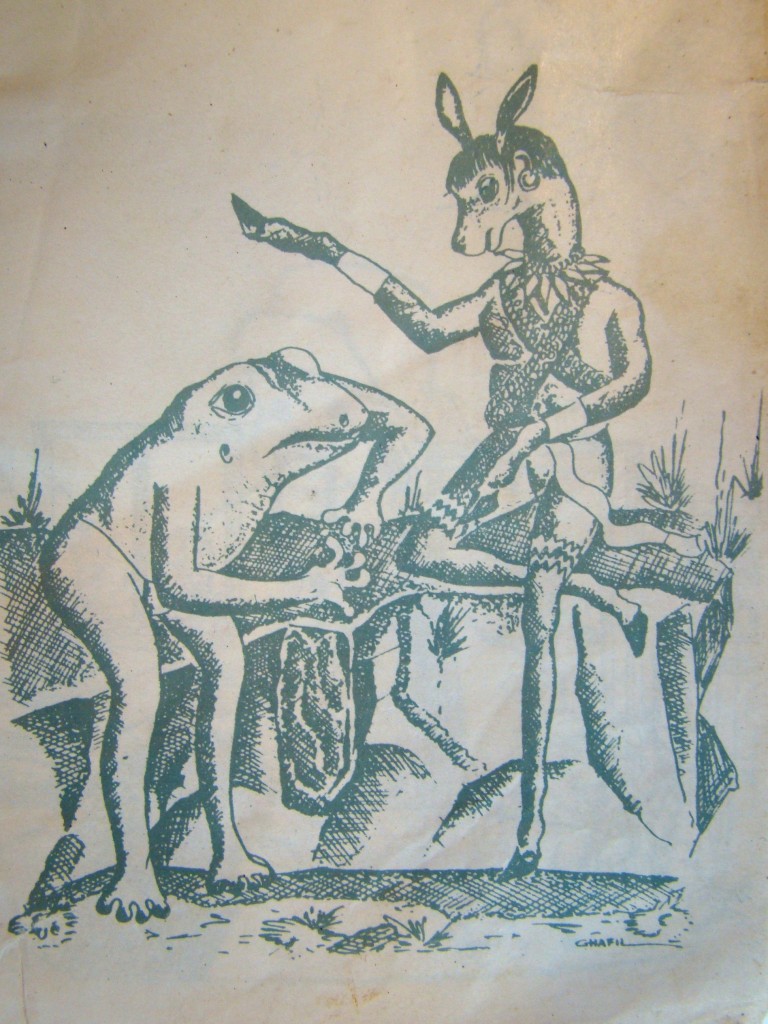 Frogs and conservation are part of many traditions and cultures.

Once upon a time, there was a deer that always made fun of small wild animals, especially frogs. “You guys are slow, weak and small,” the deer used to say and to demonstrate his strength and speed, he challenged one of the frogs to a race. The intelligent frog accepted the challenge and together the frogs planned a way to beat the deer. They agreed that each of them would wait every few meters and relieve the other and as a result, deceive the deer. The race started and the deer took the lead, but after a while the frog was ahead of him. The deer sped up and took the lead again until the frog overtook him again. Close to the finish line, the deer got tired and lost the race, not knowing that many small frogs with agile minds proved him wrong.*

If you follow this blog, you know that a group of zoos, governmental and nongovernmental organizations motivated by and concerned about the current crisis facing amphibians started this project to rescue and conserve some of the most endangered frog species in eastern Panama. It is easy to understand what motivates a scientist, a veterinarian, a zookeeper or an environmentalist to conserve a species, but we often forget that there are people whose cultures are based on the respect for nature, conservation of many species and the dissemination of this knowledge through the generations. 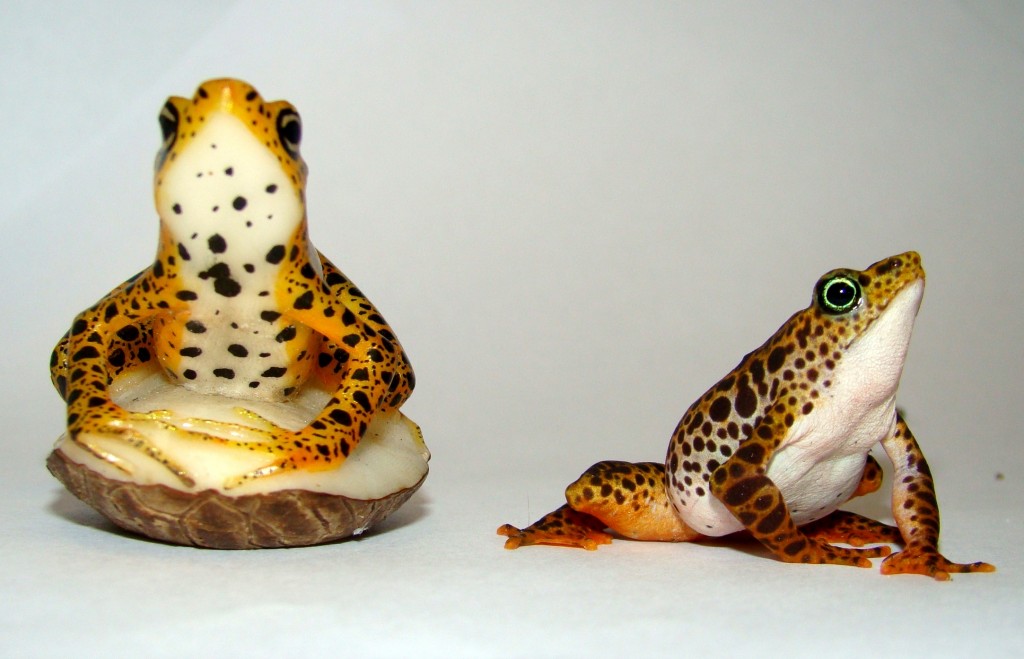 One of the rescue project's frog keepers, Lanky Cheucarama, carves these beautiful frog tagua nuts. Can you tell which is real and which is fake?

Lanky Cheucarama is Wounaan and one of the keepers at Summit Zoo for the Panama Amphibian Rescue and Conservation Project. The Wounaans are one of seven ethnic groups found in Panama and they occupied the eastern region of Panama (the Darien) and the Chocó region in Colombia. Its inhabitants are principally engaged in the sale of hand-made crafts. Baskets woven by women and carved wood and tagua (vegetable ivory) by men are some of the products offered to tourists who visit the Wounaans.

Lanky began tagua carving at the age of 12, taught by his father Chafil and uncle Selerino, two of the most outstanding artists in their community. Frogs are among the most common animals carved in tagua and take between three days (for the simple ones) and up to one week (for the most elaborate tagua) to carve. Lanky’s hand-carved tagua nuts are modeled after the frogs in the rescue project and available for sale here (proceeds support the rescue project).

For many indigenous communities in Central and South America, frogs have played an important role within their cultures. It is well know that some dart frog’s poison was used to hunt animals and was even used in weapons during fights with other indigenous groups. K’up’uur (frog, in wounaan language) is found in dances, songs, fables, art, medicine and other rites. This is why we know how important they are for this group.

Here at Summit Zoo, we always learn something new about Lanky’s culture and some of our team members and volunteers have been lucky to visit and meet his community and his family. It’s interesting to realize how even though we have come from different backgrounds; we all have the same interest: to protect and preserve what nature has to offer. By learning from each other and sharing our knowledge, we are able to save frogs and many other endangered species.

*This is a story told to the children in Lanky’s community.

These are some of the endangered frogs we have already taken into captivity in Panama. With your help we hope that we’ll be able to keep extinction at bay, but these species are far from secure. We urgently need funding to expand our rescue operations. As you consider where to make your end-of year donations, please remember that Eastern Panama is falling to chytrid fungus at a rate of 30km per year! Click here to make an online donation to the Panama Amphibian Rescue and Conservation Project. 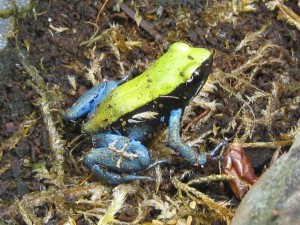 A hop, skip, and a jump from Panama (well, a little farther than that), the Mantellas are fighting their own battle with potential extinction on an island off the coast of Africa. Madagascar is home to 16 species of the frogs, which are endemic to the country, but collection for pet trade and deforestation are threatening their survival.

We first told you about Cheyenne Mountain Zoo’s Mantella captive breeding program last fall. It was animal keeper Jeff Baughman’s goal to establish a breeding program for the frogs within the zoo community, and over the past year, he did just that. In a matter of weeks, Baughman’s first batch of 70 captive-bred blue-legged and black-eared Mantellas will be on the move to AZA (Association of Zoos and Aquariums) zoos around the country.

People are drawn to the bright colors of the Mantella, colors that rival those of the more familiar poison dart frogs in Central and South America. However, only a handful of zoos in the U.S. have the endangered blue-legged and critically endangered black-eared species. Baughman started by bringing a collection from a trusted captive breeding source to Cheyenne Mountain Zoo’s off-exhibit Amphibian Conservation Center. He then created an environment similar to Madagascar’s less humid winter months, followed by increased humidity and daylight to simulate the rainy season. The females laid their eggs in March, and the end result is about 35 blue-legged and 35 black-eared Mantellas.

Chytrid has not yet spread to Madagascar, but if it does, the effect would be devastating. Because Mantella populations are so fragmented, they could easily be wiped out by the fungus. That’s why the Wildlife Conservation Society and other experts are looking at creating a facility in Madagascar, similar to the one in Panama.

What can you do to save frogs? If you’re buying them as pets, it’s important to find out where they came from. Make sure you get your frogs from a trusted captive breeding source and avoid buying frogs caught in the wild.

Cheyenne Mountain Zoo guests are helping frogs, too. In 2008 – 2009, the zoo’s Quarters for Conservation program supported a conservation and research organization in helping protect Mantella frogs in Madagascar. With every visit this year, zoo guests can vote to provide funding to the Panama Amphibian Rescue and Conservation Project. 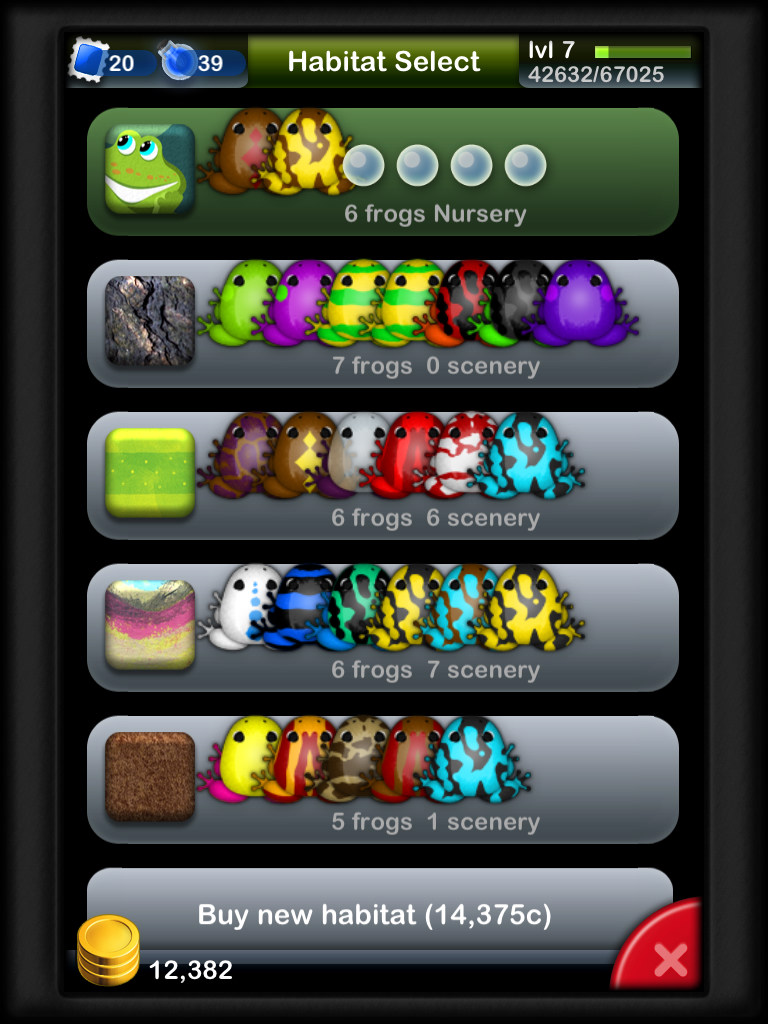 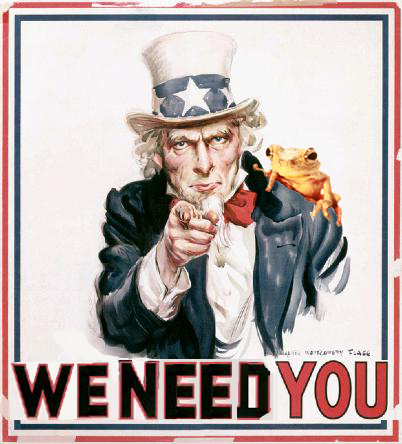 The price we pay every time a frog species goes extinct due to chytrid is beyond measure. The cost of saving frogs, however, is scant in comparison. But we need your help! That’s why we’ve launched a mobile giving campaign, providing an easy and convenient tool for you to give money to help us battle chytrid and provide the frogs a safe haven. Just pull out your cell phone and text “FROG” to 20222 to make a $5 donation to the rescue project.

Every $5 that comes in this way will go toward the project’s efforts, like our new goal of raising the $50,000 it takes to turn a shipping container into a rescue pod. These rescue pods are biosecure “arks” where we can care for frogs that would otherwise be hit hard by the wave of chytrid. Without this ark, we won’t have a safe place to keep the frogs—so help us raise the funds by spreading the word!

So what can your money help buy? Check it out:

$5: Three swab sticks used to test frogs for chytrid.
$5: A box of gloves to help ensure the cleanest and safest handling of the frogs.
$5: Pair of Crocs for keepers and visitors to change into to prevent bringing anything harmful into the biosecure rescue pods and areas where the frogs are kept.
$5: Small cricket container—caring for the frogs’ food is an important part of caring for the frogs.
$10: Four gallons of bleach, to keep the floor of the pod and quarantine rooms sterile.
$10: Large cricket container.
$10: Frog quarantine tank.
$15: Tub of yeast to feed fruit flies, which in turn are fed to the frogs.
$20: Calcium powder for frogs to keep them strong and healthy.
$20: Paper towel pack to help clean the tanks.
$30: 100 pounds of tilapia (fish food) to feed the crickets.
$30: Standard frog tank.
$150: Bottle of anti-fungal medication to treat the animals for chytrid.

*A one-time donation of $5.00 will be added to your mobile phone bill or deducted from your prepaid balance. Donor must be age 18+ and all donations must be authorized by the account holder (e.g. parents). By texting YES, the user agrees to the terms and conditions. All charges are billed by and payable to your mobile service provider. Service is available on most carriers. Donations are collected for the benefit of the Panama Amphibian Rescue and Conservation Project by the Mobile Giving Foundation and subject to the terms found at www.hmgf.org/t. Message & Data Rates May Apply. You can unsubscribe at any time by texting STOP to short code 20222; text HELP to 20222 for help. You can also find the privacy policy here.