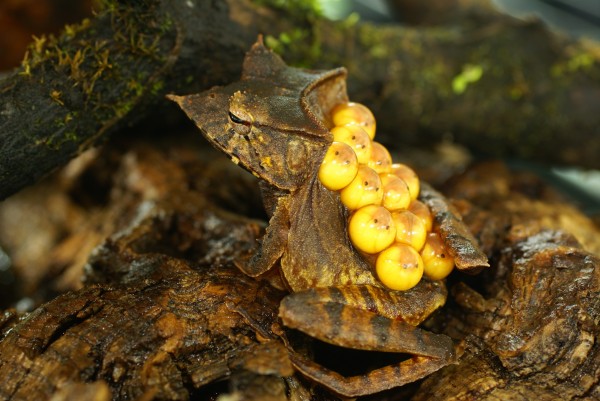 The casque headed tree frog (Hemiphractidae: Hemiphractus fasciatus), is one of 11 species of highest conservation concern now being bred in captivity in Panama. Females carry eggs on their backs where the young complete development hatching out as miniature frogs. DNA barcoding data suggest that populations of H. fasciatus may comprise more than one taxonomic group.

What if Noah got it wrong? What if he paired a male and a female animal thinking they were the same species, and then discovered they were not the same and could not produce offspring? As researchers from the Panama Amphibian Rescue and Conservation Project race to save frogs from a devastating disease by breeding them in captivity, a genetic test averts mating mix-ups.

At the El Valle Amphibian Conservation Center, project scientists breed 11 different species of highland frogs threatened by the chytrid fungus Batrachochytrium dendrobatidis, which has already decimated amphibian populations worldwide. They hope that someday they will be able to re-release frogs into Panama’s highland streams.

“If we accidentally choose frogs to breed that are not the same species, we may be unsuccessful or unknowingly create hybrid animals that are maladapted to their parents’ native environment,” said Andrew J. Crawford, research associate at the Smithsonian Tropical Research Institute in Panama and professor at Colombia’s Universidad de los Andes. Crawford and his colleagues make use of a genetic technique called DNA barcoding to tell amphibian species apart. By comparing gene sequences in a frog’s skin cells sampled with a cotton swab, they discover how closely the frogs are related.

The Smithsonian Tropical Research Institute, headquartered in Panama City, Panama, is a unit of the Smithsonian Institution. The Institute furthers the understanding of tropical nature and its importance to human welfare, trains students to conduct research in the tropics and promotes conservation by increasing public awareness of the beauty and importance of tropical ecosystems.