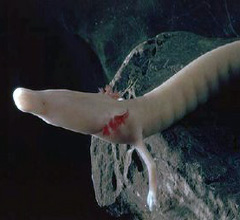 The olm (Proteus anguinus) native to Bosnia and Herzegovina, Croatia, Italy, and Slovenia and introduced in France, is unique because of its pigmentation, which resembles human skin. This species generally occurs in large subterranean aquatic karst systems formed in limestone and dolomite rocks, and may be found in cave entrances and abandoned mine workings. This salamander is the old man of the bunch having a maximum lifespan of over a century.

Just because it’s blind does not mean the olm is defenseless. With its super-hearing abilities the olm can receive sound waves in the water as well as vibrations from the ground. Interestingly enough, this salamander will never have to ask for directions; instead it uses the earth’s magnetic field to orient itself. The main threats to this species are changes to the forested and pastoral land above the subterranean systems, largely through tourism, economic changes, and increasing water pollution. At the current time the species is listed as vulnerable by the IUCN.