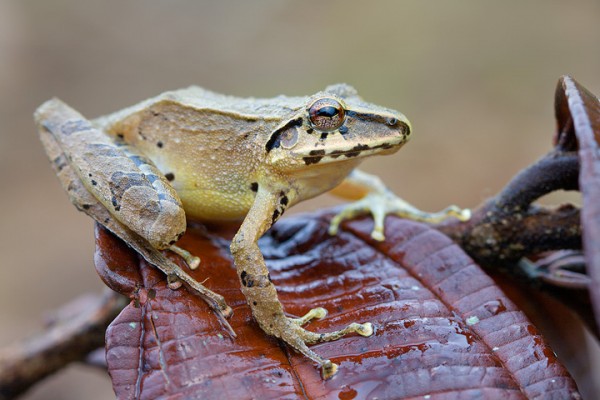 The W rain peeper (Pristimantis w-nigrum), native to Ecuador and Colombia, resides at vertigo-inducing heights of between 800 meters and 3,300 meters. As is the Latin American tradition, this species is a frog of many names and additionally referred to as the Zurucucho robber frog and the cualita. They can be found near streams or far from them, in cloud forest and sub-paramo habitats. It may not look it, but this is one hardy frog—it is able to tolerate substantial habitat disturbance. Major threats to this species include water pollution and potentially chytrid.

This species is called the W rain peeper because of its characteristic W-shaped mark on the scapular or shoulder region. The W rain peeper has a more neutral coloration and gruffer appearance, making it the tough guy among peepers. It possesses an inimitable marking around its mouth that makes it look like it just finished eating chocolate. Currently, this species is listed as least concern by the IUCN.