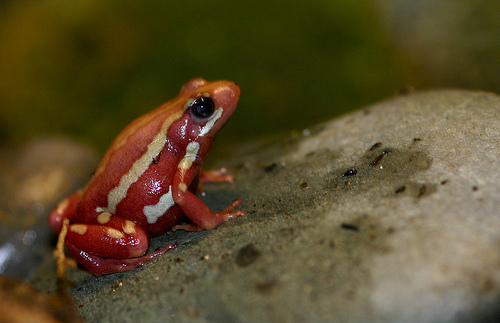 Despite the perception that many of our pharmaceuticals come from a scientist randomly mixing chemicals in a lab, many of our medicines are derived from wild plants and animals.

It’s a fiercely competitive world out there and nature resorted to chemical warfare long ago. Organisms evolved to produce these costly molecules to protect themselves from predators. From plants to butterflies to frogs, everything is in on the act.

Think back to the last time you took some aspirin. Did you ever think about where this widely used medicine originated? The active ingredient in aspirin, acetylsalicylic acid, is derived from a compound found in willow bark. Going back as far as Hippocrates (~400 B.C.E), people have used willow bark to ease pain and fever. The new compound is only slightly tweaked from the original to make it lighter on the stomach.

One of the most famous examples of frog poisons comes from the poison dart frogs of Central and South America. Some of the most toxic of them carry enough poison to kill several adult people!

I want to focus on one of them, the phantasmal poison frog (Epipedobates tricolor) of Ecuador. This little frog produces a very strong toxin called epibatidine. Epibatidine, as a toxin, targets the nervous system, causing paralysis and death with even small doses.

In 1974, Dr. John Daly at the National Institutes of Health discovered that secretions from E. tricolor worked as powerful pain-relievers at super low doses. How powerful? Try 200 times stronger than morphine, but without the addictive side effects.

The discovery hasn’t led to a drug on the shelf yet, but since the 1990s, a method of synthesizing epibatidine has provided researchers with all the test substance they need to find similar but safer compounds with the same effects, just like the discovery of aspirin. Even today, papers are still being published about new, promising molecules inspired by the epibatidine from this tiny frog.

The cautionary tale in this story is that not all E. tricolors produce epibatidine. Many species of poison dart frogs do not produce their deadly toxins in captivity because they eat a different diet than they do in the wild. In the wild, E. tricolor is losing its old rainforest habitat and moving down the mountain to banana plantations where they eat a different diet of insects than they used to. These individuals do not produce epibatidine.

In the end, it is not just a single species of frog or plant that matters. It is the rainforest ecosystem as a whole. I think it’s worth saving if not for its beauty, then for the promise of easing pain around the world.