The rain frogs live most of their lives hibernating under the sand in Southern Africa and also creep rather than hop. Only after heavy rains will they emerge from the earth to eat and to breed. The males are so much smaller than the females they must actually secrete a glue from their abdomen to stick on to the females back and hitch a ride to where she will dig her underground burrow to deposit her eggs! (Photo courtesy of the Houston Zoo)

Frogs and Painted Dogs.  It’s got a nice ring to it.

It might seem unlikely that a conservation organization focused on a large charismatic carnivore would be interested in using frogs and toads to teach students about research, biology and conservation. But amphibians are an indicator species in a habitat in which the painted dog depends on survival and a model organism for teaching taxonomy, biology, adaptations, ecological concepts, environmental threats and how students can implement conservation action. 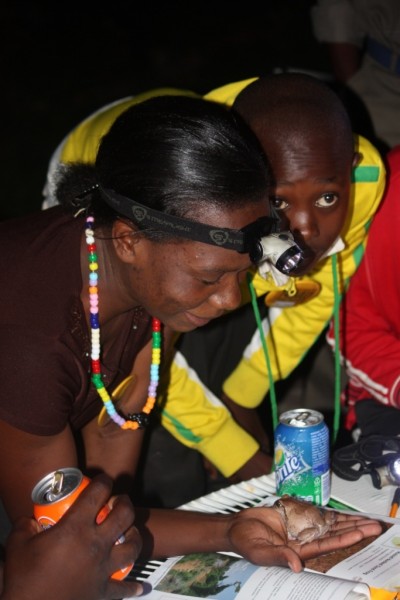 A teacher holds a bocage

After scouting out potential study sites, Rachel conducted nightly visual and audio searches and documented 16 species of amphibians. Cullen identified the bat species that would be observed with the children during the program. They visited local villages and schools accompanied by PDC education staff creating conservation action plans that would be implemented by teachers and students .

With ideas for community conservation programs and a familiarity with the local fauna, Rachel and Cullen welcomed 11 exceptional and gracious pupils from Nechilibi High School to pilot the first PDC Kids for Science program, an intensive two-day course including class presentations, classroom training activities, field exercises and interactive discoveries.

After learning how biologists detect and monitor animal activity and how scientific information is collected, students spent two evenings in the field, at Hwange National Park and Granda Lodge making observations and assisting teachers, conservation coordinators and a National Park staff member in the capture and data collection of amphibians and bats.

A final project, an amphibian field guide, was assembled by the group to present to their classmates and headmaster.  The students, now community ambassadors for amphibians and bats, are now tasked with creating specific ways their school and club can help in the conservation of insectivores and will report back to PDC this spring.