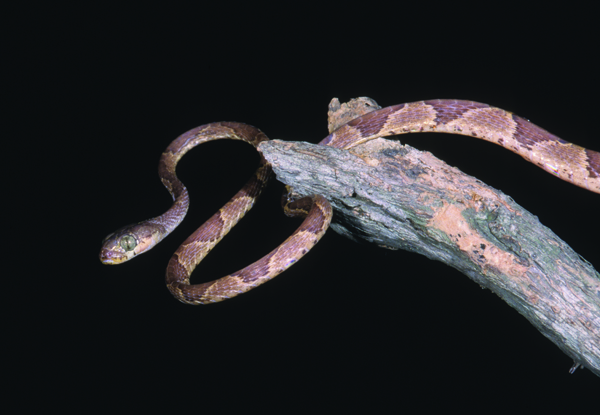 Researchers recently confirmed that the fungus causing the lethal disease chytridiomycosis is present on nonamphibian carriers, such as this blunt-headed tree snake, in natural environments. (Photo courtesy of STRI)

The blunt-headed tree snake (Imantodes cenchoa) not only eats frogs and their eggs, it also carries the killer fungus that has wiped out more than 100 amphibian species worldwide.

A new study by Vanessa Kilburn and David Green from Canada’s McGill University with the Smithsonian Tropical Research Institute’s Roberto Ibáñez, in-country director of the Panama Amphibian Rescue and Conservation Project, confirms for the first time that the fungus causing the lethal disease chytridiomycosis is present on nonamphibian carriers in natural environments.

The team surveyed 13 species of lizards and 8 species of snakes from sites across Panama using a genetic test to identify fungal DNA in samples taken from the reptiles’ skin with a cotton swab. They found evidence of the disease on up to 32 percent of lizards (Anolis humilis) and on three different species of snakes.

The irony of a frog-eating snake that carries a killer frog disease is that it may eliminate its own food supply, leading to its own demise.