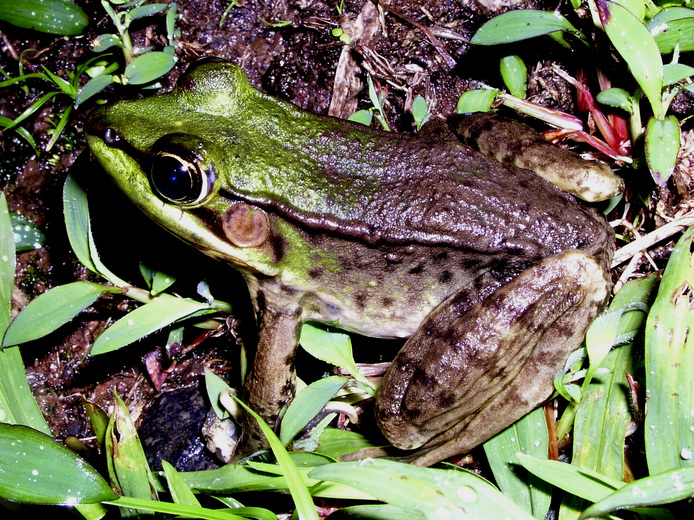 The next time the princess in a tropically set Pixar fairytale wants to liberate her prince by kissing a frog, she would be wise to seek out the 3.5-inch-long individual, not its larger 5-inch-long counterpart. Like many neotropical species, Vaillant’s frog showcases sexual dimorphism and dichromatism. For example, females are generally larger than males, but males are livelier in color. They sport vivid green while the fairer sex is happy in a subdued gray-brown. The princess might choose Vaillant’s frog because it fits the popularized conception of a frog. Large, stocky, and rugged-looking, it lives a semi-aquatic life, floating and resting on the surface of ponds. Between dense mats of floating vegetation, only its rounded black eyes and green head emerge from the water. On shore, it sits and waits for a passing insect for its meal. But it will also go for fish or birds—a fact that gives you a better sense of its relative size. On land, it expends a lot of energy trying to evade a host of frog-eating neotropical snakes (for example, the Mexican snake eater, Clelia scytalina). If it does run into one, Vaillant’s frog makes a mad dash towards the safety of water, diving headfirst. Next stop: the bottom of the lake, where it lays quietly until the danger has passed.

Vaillant’s frog is found in Costa Rica and Panama and tolerates a wide range of habitat types and human encroachment and alteration. Its population is stable, but pesticide use, primarily from aerial spraying, will threaten it in the future. The chemicals find their way and stay in the water.