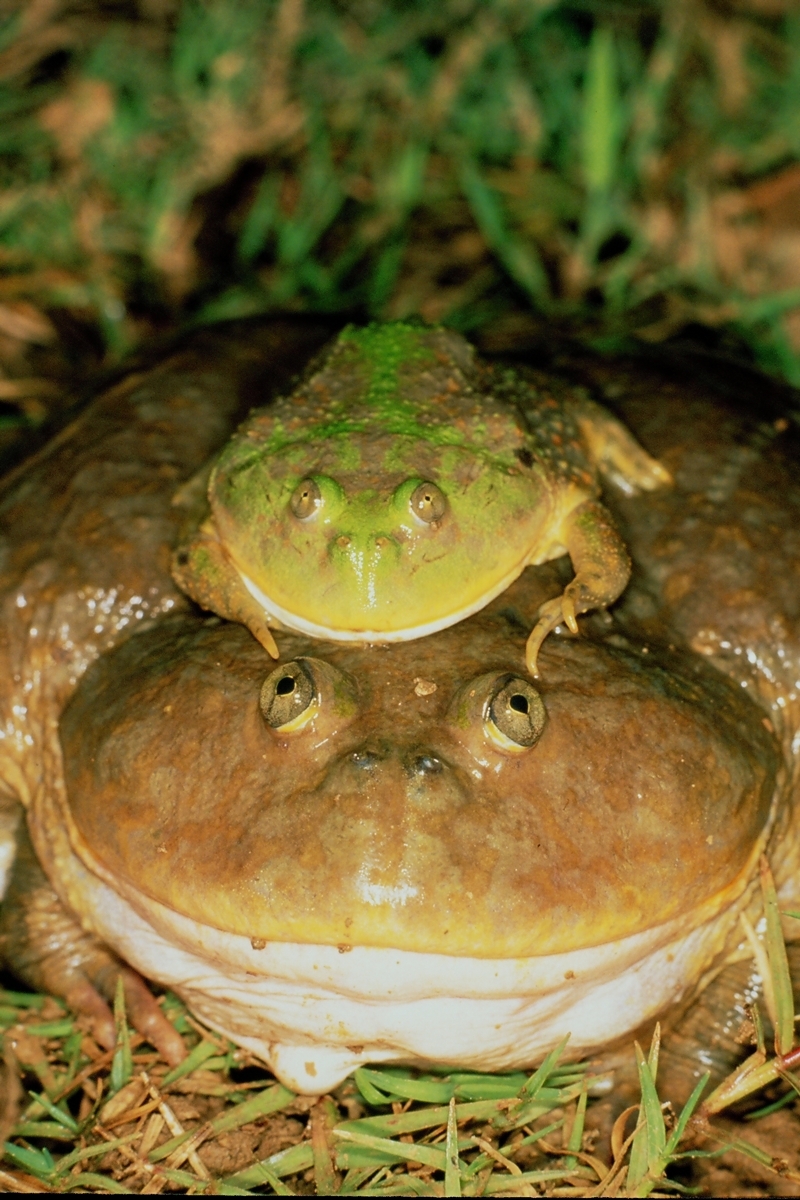 A large, stout aquatic frog, Budgett’s frogs occur in the Gran Chaco of South America, a semiarid region extending into northern Argentina, southern Paraguay and much of Bolivia.

During the dry winter months, Budgett’s frogs remain inactive underground, encased in a hard shell composed of layers of unshed skin.  These guys were into cocooning before it was popular.  In this case, they’re not catching up on their reading, bonding with family members or Web surfing.  The cocoon in this case protects them from excessive water loss and allows the frog to persist until the rains arrive, signaling the beginning of the wet summer months (October to February).  The heavy spring or summer rains flood the chaco and create many temporary pools or “pozos” which provide suitable habitat.

These frogs appear to be nocturnal sit-and-wait ambush predators. Remaining motionless while submerged in the water or soft mud with only their eyes and nostrils visible, they wait among grasses and reeds for prey to come within grasp of their strong, powerful jaws. Don’t let the sly smile fool you – this is a very aggressive frog. When disturbed, they inflate themselves and stand on their outstretched limbs to appear larger. And if that didn’t convince you to go away, the Budgett’s frog will lunge, bite, and then emit a piercing shriek. In fact, the name for this species in Guarani is kukurú-chiní or “the toad that shrieks.” Quite a reputation for a smiling frog, eh?

That’s just the half of it.  You should see the tadpoles.  When they hatch and begin feeding, their uniqueness becomes even more apparent. The tadpoles are carnivorous and cannibalistic and begin feeding almost immediately. The cartilages that support the larval jaws are expanded laterally to create a wide, gaping mouth that the tadpoles of this species use to ingest their prey whole. Someone should remake John Carpenter’s “The Fog’ into ‘The Frog.’  These animals would be a natural.

But Hollywood will need to move quickly.  Budgett’s frogs do not appear to be particularly abundant where they occur. Combined with their strict habitat requirements, Budgett’s frogs are vulnerable to habitat modification associated with agriculture and ranching where they occur. And like so many of their amphibian cousins, this species is also apparently susceptible to chytridiomycosis, with one death reported in a captive specimen.