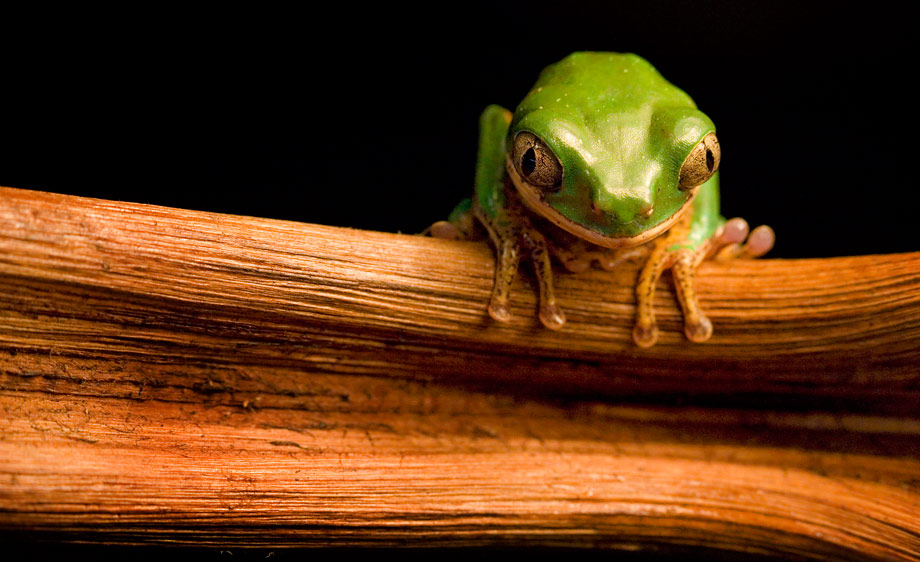 Part tiger? Part frog? Part monkey? The tiger-striped leaf frog (Phyllomedusa tomopterna) has many unique features. Its orange belly and tiger-like stripped legs make it unlike other frogs. Though they don’t hop much, these frogs climb using their hands and fingers, much like monkeys do. Tiger-striped leaf frogs live in the tropical lowland forests as well as the tropical and subtropical swamps where they like to hang out in the canopy above pools of water. Doesn’t their skin look waxy and smooth? That’s because they produce and apply a waxy substance that covers it. Not only does this give the frogs a polished look, but it acts as a built-in sunscreen to protect the frogs from harmful rays of the sun and to retain moisture. This remarkable adaptation allows the tiger-striped leaf frog and its sister species—monkey frogs—to visit niches in the treetops, exposed to the sun, where other types of frogs couldn’t survive.

But don’t expect to catch these little guys out during the day! They like to do their exploring at night. Even during the day they’re hard to spot—they tuck in their arms, legs, hands, feet, fingers and toes, shut their eyes and press their chin down against a resting surface. In this way, they appear to be nothing more than a bump on a branch or lump on a leaf. The colorful sides of their body and bold orange and black stripes on their limbs are artfully concealed while the frog snoozes.